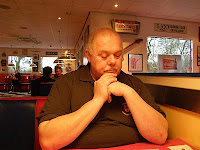 This picture was taken at the OK Diner, Leominster when we were having a birthday treat for Mr M's birthday.
This year Mr M and I have been married thirty years. Isn't that wonderful?
We met at the wedding party of my cousin's daughter in 1980. I was newly divorced and picking up the threads of my life again. I had been to camp with 56 Girl Guides 5 Ranger Guides (3 of them doing their leadership training) and 3 adult Guiders. I arrived home to an empty house because Mum and Dad had gone to the wedding. I showered and washed a week's smoke out of my hair - in those days it was long enough to sit on - and fell onto the bed wrapped in several towels. My daughter was walking Offa's Dyke Path with the Rangers and both my sons were at Scout camp in the Brecon Beacons.

I had reached that point where I was almost asleep but still aware of what was going on when Mum and Dad arrived home. Mum came up and knocked on the bedroom door to "make sure you are alright".

"Pat is so glad you are going to the party tonight," she said, "I told her you would go early and give her a hand"

I kept the groan inside me. I was sooo not looking forward to a party. I really hate walking into a room full of people, even if I might know some of them. In some cases because I might know them. However, this was my cousin and as she is the oldest of all the cousins in this family it is she who must be obeyed, because she is always right.

I found something to wear, I brushed my hair and put it into a plait because it was still damp and I have never had a hairdryer. I went out to my vehicle and realised that I still had three tents and all the cooking gear and the storage boxes for the food in the back.

AH, I didn't tell you did I? My vehicle was an ex-ambulance. because my ex took the car when he left my dad tendered for an ambulance and for several years the kids and I travelled around in what was an old minibus - fantastic!

I decided that I would cover it all with a ground-sheet and just go. I arrived at my cousin's house and as I walked up the path to the front door I noticed this rather good-looking blond young man sitting on the wall smoking a cigarette. I smiled at him and he smiled back.

Until that moment I had always scoffed at those books that said "her heart leapt as he smiled at her" because mine did! right into my throat.

This is the confession bit.

I thought to myself (as a newly divorced, single, free to love 'em and leave'em liberated woman) I fancy some of that.

I went into the house and he followed. It turned out that he had been best man at the wedding (no argument from me there) and was now nicely drunk because he had done the speech and everything. I was introduced to him. We all went to the party, which was being held in a pub somewhere across town. Everywhere I sat he was visible. If I went out for a breath of air he was there too.

Somewhere around midnight everyone went back to my cousin's house and the party continued. We sat on the patio and there he was next to me. We talked and very soon discovered that we could finish one another's sentences. By 3am we were lying side by side on sunloungers watching the stars slide past the guttering on the roof and discussing the universe.

By 8am I was totally smitten.

He was driving my cousin to Weymouth that morning, together with her newly married daughter and son-in-law. He asked me to go too and insisted that I sat in the front seat next to him. I had told him about my children and my divorce and he was still there. My cousin found a cafe and while she had to go visit someone she deposited us there. Mr M muttered something about "back in a minute" and he too disappeared.

He was gone for the longest half our of my life.

I started to think you can't come to the seaside and not..." he said "We'll have an icecream cone" and looked at me. "You just thought that didn't you?" he said. "Yes," I said and we both said together "and it's not the only thing."

I still get that little flutter of excitement when I see him after a day's work. We still finish each other's sentences, we never get tired of each other's company and there is still so much we have to say. My children adore him and come to him first if they have a problem. My daughter asked him to give her away even though her birth father was to be at the wedding because "You have always been a better father than him"

This story has been brought to you through Story-telling Sunday. Devised by Sian why not take a look at all the other stories
Posted by Ladkyis at 05:32

Oh, gosh, such a lovely roamntic story! Congratulations on 30 years.

You know how much I love your stories and this one is a cracker :) I love it! And 30 years later, still going strong? That's just wonderful.

I really enjoyed your description of the camping and washing the smoke out of your hair too - I remember that feeling so well. I was a Queen's Guide and the times I spent camping were some of my happiest childhood days.

Thank you for telling your story. I was really pleased to see your name appear after all :)

30 years? That is indeed wonderful, many congratulations :-) This is a beautiful story, thank you so much for sharing it with us xx

PS I'm the oldest of all the (many) cousins in my family, but sadly I don't seem to get obedience from the rest of the clan. Must be doing something wrong...

I absolutely loved this story, thanks so much for sharing itxx