This term cookery club has started and Miss M loves it. Last week was the first session so I did not have to be at the school to collect her until 4.30pm. This is strange in so many ways. I worry that I will nod off to sleep and be late so on Sunday night that was my nightmare. I didn't nod off and I was in the school yard when she bounced out of the door.
"What did you make?" I asked as we walked down the path, "Cheese rolls and marmalade" she replied. I managed not to stop dead and stare at her. "Really? was is nice?" I asked, thinking that my mother would be proud of my self control.
"I liked most of it but not the mar...marmalade." "Good" said I, "Mummy will be interested too."
The conversation went onto what someone else had done and how her best friend had forgotten it was cookery club so she had gone home at 3.30 with her Grandad.
When Mummy came home from work she was very intrigued to hear about the cheese roll and marmalade but she said she would ask the teacher on Wednesday after Rainbows. It seems that the teacher's little girl goes to Rainbows too.
I waited eagerly for Wednesday evening and took Miss M over to the hall. Mummy arrived home from work and then popped across the road to collect her. 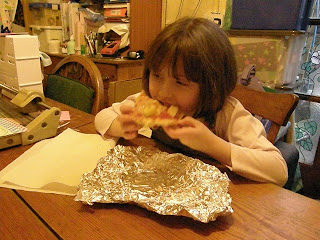 When she came back she was grinning from ear to ear. It was cheese whirls and marmite. Such an easy mistake to make when you are nearly seven with a head full of fairies.

This week was easy - pitta bread pizza. As you can see from the picture she didn't manage to eat all of it in school so she had to finish it at home. Ham, pineapple, cheese and tomato and she ate all of it except the "red lumps, Grandma, I don't like the red lumps." She picked those off and gave them to the chickens, the rest she ate
Posted by Ladkyis at 11:47

Lovely story, you should have kept it for Storytelling Sunday!

Hahaha! Yes it would have made a perfect Sunday story. But then I know you always have another great one up your sleeve :)

I understood cheese and marmalade, but what is cheese swirls and marmite? Sounds interesting.