Way back in the Seventies, yes, that's the nineteen seventies, when I was still married to my first husband we lived three miles outside a small village called Raglan. It has a castle and was the last castle to surrender during the English Civil War. But that's not what my story is about.
Because the village is not large there was, and still is a thriving community spirit. The Village Hall Committee was raising money to fix the hall and we (I was a member of several committees) hit upon the idea of a Tramp's supper where everyone would dress up as a tramp and there would be food and a bar and some music and perhaps a few local people would get up and "do a turn".
I told Mr and Mrs Bluefunnel about it and they bought some tickets. Because they bought tickets my ex decided that he would come with us. This was a shock.
The day dawned and the Bluefunnels arrived with all their costumes and props. My ex decided that he would go dressed as a woman. This was a shock.
We drove into the village and parked the car. Realising we were a little early Mr Blue suggested that we went into the pub first. There were three pubs in the village then, The Ship, The Beaufort and The Crown. The Beaufort was very posh and going in there dressed as tramps was not a good idea. The Ship was one of those pubs that anyone who had lived in the village less than 100 years would stay away from, the regulars "looked" at you like something out of American Werewolf in London. We went into the Crown. All except Mrs Blue who was resplendent in a couple of skirts several torn tops a coat that looked as though it had been torn from the jaws of an angry lion and a hat. A hat with a wide floppy brim. A hat that she informed us had spent days being sat on in work and had been stretched and pulled and twisted. It was a magnificent wreck of a hat.
She didn't want to come into the pub with us because going into a room full of other people dressed as tramps was OK but into a pub with "normal" people was more than she could cope with. Mr Blue had, as one of his props, a pushchair. Not one of the modern folding buggy types but an old fashioned pushchair. into this he had stored his treasures and covered them with a piece of old blanket. This came into the pub too. So there we were Big Smed (as Mr Blue called himself because he had an empty Smedley's Peas tin in his treasures) Crimpo (that's me because my hair was very long and wavy) and this six feet two inch tall bloke in tartan tights a paisley dress, a fur cape, a dreadful nylon wig and a fuchsia pink beret type hat - oh and a pair of cork-soled platform shoes that had been cut open ti fit his feet and then tied together with thick string to keep them on.
We certainly got the attention of the customers in the pub.
Mr Blue said he would get the drinks. This was after he had approached several people we knew and asked them for "a shilling for a cup of tea Guv." As he leaned forward to give our order to Ann behind the bar Mrs Blue was with us. Actually she was in front of us telling Ann what she wanted to drink. We got our drinks and looked at Mrs Blue 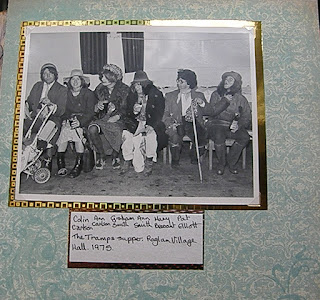 "I couldn't stay out there. There was this man." she looked at us as though we should understand. We didn't.
"He propositioned me!" she wailed, "and I thought that anyone who would proposition someone dressed like me wasn't safe to be alone with so....." her voice was drowned by our raucous laughter. Gosh we were so cruel in those days.

This story has been brought to you by Storytelling Sunday created by Sian at Fromhighinthesky why not go there and see what everyone else has written. There are some truly remarkable stories there.
Posted by Ladkyis at 01:34

Great story, I bet the photo is hilarious!

Yes, I agree, that photo will be worth searching for!

Hehehe! That would have been so much fun!

Loved the descriptions of the costumes. It sounds like all of you went "all out" for the fundraiser. If you had that much fun before the party, I can only imagine what the event itself was like!

Such a beautifully written, wonderful story, as always.

A wonderful story told with such spirit. That's a great line-up on the photograph.

wonderful story and photo, such fun!

..and just when I thought it couldn't get any better, you produced a photo! How fantastic! I just knew you would have somethinmg else up your sleeve for today. Hurray! I love that. Thank you for another top notch Storytelling Sunday tale

What a great photo and I love the story too :)

Brilliant tale - what an experience!

Brilliant, absolutely brilliant! Thanks for sharing. :)

Interesting read at quite a pace - great to see another blogger