I know that some people who know me consider those three words with dread and some of them ~turns her eyes in the direction of her daughter~ have been seen to flinch!
Anyway, I've been reading a book and combined with the fact that I was going through the old photographs in grandpop's ditty box it has made me think about the difference between when I was in Junior school and now.

There was a fatality about things. I distinctly remember someone in the playground telling us about the four minute warning. We were used to the sirens because they were still tested even though the war had been over for ten years. The boy, and it was definitely a boy who told us, said that we would hear the sirens and then we would have four minutes to find shelter before the nuclear bombs would detonate and we would all fry.
I remember being terrified as my imagination conjured up images of flames and white light and then I thought "What is the point of trying to find shelter if we are all going to die anyway?" and the terror was gone. I never worried about it again. I did once time my journey home and realised that if I ran I could be at home with my mother in three and a half minutes so everything was fine. 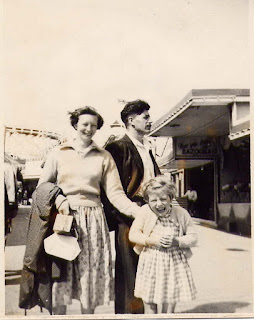 Thinking about this attitude now I am pretty sure that it was my father's fatalist mindset that caused me to react in that way. You see my Dad was injured right at the end of WW2. He had gone to Europe with the BEF in 1939 and had been driven into the sea at Dunkirk. In fact when my daughter asked him what the Dunkirk Medal was for he told her it was for running in the "hundred yards dash along the beach, everyone got one." He went back to Europe a few days after D Day and being with the RMRE he was with the leading troops as they headed for Germany. He was blown up by a landmine and badly injured, losing his right leg and being wounded in his neck and face by shrapnel. He wasn't expected to survive. He did though and because he was in hospital he met my mum.
Dad always said that when he asked the doctors what his life expectancy was they told him 15 years. He lived his life with that in mind so he crammed in as much interesting stuff as he could while still working and trying to build his business. This attitude has to rub off doesn't it? He wasn't afraid of dying he simply wanted to make good use of his time.
So there I was in the late 1950s and it was a weird feeling. I wasn't afraid while people around me were very afraid. They talked about how the government should build huge shelters for people, one that could shut out the radio active stuff and people could live there for years and years until it was safe to come out. I am claustrophobic so there was no way I was going into anything that would be closed up and not open for years and years.
I remember mentioning to my mother that I hoped that when - and at that time it was when and not if - the bomb fell I wanted to be right underneath it because I didn't want to go into a concrete bunker and I didn't want to get radio active either! My Mum's only reaction was a sharp intake of breath, a pause and then she said "Sometimes you are so like your father you frighten me"
I'm not really sure why it was so important to write all this down but it was and I have. It's funny how a few pictures and an autobiography can make your mind work isn't it?