A surfeit of Lemons

recently I made a sugar free lemon meringue pie and while I was gathering the ingredients together I realised that I needed more lemons so I texted Mr M who was doing the shopping and asked for more lemons.
"too late" he replied. This meant he out of the supermarket and would not be going back just for some lemons. I texted my daughter who was also out shopping and asked if she could get some lemons. She was in the market and right next to the greengrocer's! Hurrah!
Mr M arrived and as I unpacked the shopping I found a net bag of four lemons. I gave him the look, you know the one, not yet cross but still wanting to know what's going on.
"I stopped at Aldi on the way home," he said, "You wanted lemons, I got lemons." I gave him a hug and a kiss for being so thoughtful and then asked for the loose change from his pocket so I could pay my daughter for the lemons when she brought them, which she did. Another four big lemons from the market. 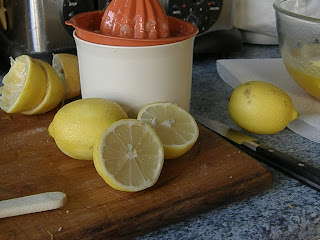 I used two for the lemon meringue and then wondered how to use the rest.

Thank goodness for my Good Housekeeping Cookbook. It has to be the best thing I ever received. I think I bought it about 1970. All the recipes are in Imperial and metric measurements so it has to be early 1970s when we were changing over.
It has wonderful things in it like Eve's pudding, and Chutney recipes and ... 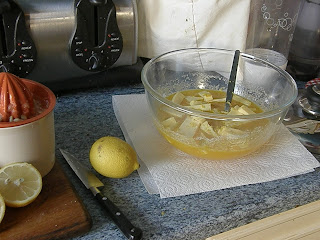 I first made lemon curd when I was in Agricultural College - class of 1962 - I know it has sugar in it and Mr M can't eat huge amounts because of the Diabetes but he does without so much and I know we are hopeless about diets but I just had to make it.
4 eggs, beaten
The grated rind and juice of four lemons,
100g of butter,
450g of sugar. 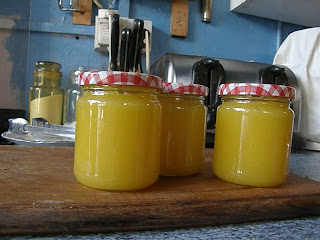 Put all the ingredients into a bowl and stand this on a pan of simmering water. make sure the bowl does not touch the bottom of the pan. If you have a double saucepan then use that.
Stir the ingredients until the sugar has dissolved and then continue to stir until the mixture thickens.
It is difficult to describe how to know when it is ready you just keep stirring and it thickens, then thickens some more and then even more. Then when you dip the wooden spoon in and lift it the curd kind of flakes away from the spoon.
You can drop a little onto a cold plate and if it keeps its shape and dosen't run across the plate when you tilt it then it is ready. Put into sterile jars. put the lids on tight and leave to cool. Will keep for about a month in a cool place. There are no artificial colours no preservatives except the lemon juice and sugar.
This recipe makes about one and a half pounds. I deliberately put it into 8oz jars because they will be used up quickly after opening.
We had to lick the spoons and scrape out the bowl so we have had our sugar allowance for today - YUUUMMMMMM.

Don't you just love a husband who grocery shops?? About the ornament wreaths (I didn't have your email address, so had to post here). You use a wire coat hanger and round it out. Then you unwind the top and simply slide the ornaments on. We had a little trouble because some of the tops came off---we should have hot glued all the tops first. Just use any random ornaments in any order---they bunch up on their own. We used plastic, as I thought glass might be too fragile. But if I had a bunch of glass, I would go ahead and use them. Be sure to allow room to twist the coat hanger back together. Add a big bow to hide the hanger and you're done. Do let me know how yours turns out!!

I love that my dh shops - well at prefers collecting but will shop.

Wookie said thank you for the correction and laughed at the GWR comment, he too likes the mallards - both ducks and trains.

Love lemon curd - had lemoncello sorbet tonight for dessert. You can make lemon curd in the microwave too.

I put the lemon rinds in the dishwasher to get the oils in and clear grease.

I can almost smell them from here. I saw a lovely phrase on Mitra's blog the other day "I'm pretty fond of most everything lemon" - doesn't that have a good ring to it?

Oh that sounds yummy. I haven't had that in absolutely ages - not since my Mum passed away. Thanks for including the recipe (now to convert it).