I just had to try it out

One of the things that screamed "buy me!" was the silicone chocolate marshmallow mould. Now that's a must have if ever I saw one. Mind you, I could hear my Dad's voice in the back of my mind, muttering something about neither use nor ornament, but I had to have it. I wanted to make chocolate marshmallow cakes. Those fabulous domes that were such a special treat for tea.
Do you remember how they were individually wrapped in red-striped foil and the mere sight of them set your mouth to watering in anticipation. Now I could make my own! any time I wanted, and eat them all, any time I.... ah but there is a lot of sugar in marshmallow and I am diabetic and so is Mr M so eating all of them would not be an option. In fact, eating any might not be a Good Thing.

I had rung Lakeland and ordered the mould together with the replacement gas cylinders for our soda stream and the chocolate for the marshmallows and they sent everything really quickly, as always.

So there it sat, with it's recipe card, waiting for me to have a go at making chocolate marshmallow cakes. So I did. They are HUGE 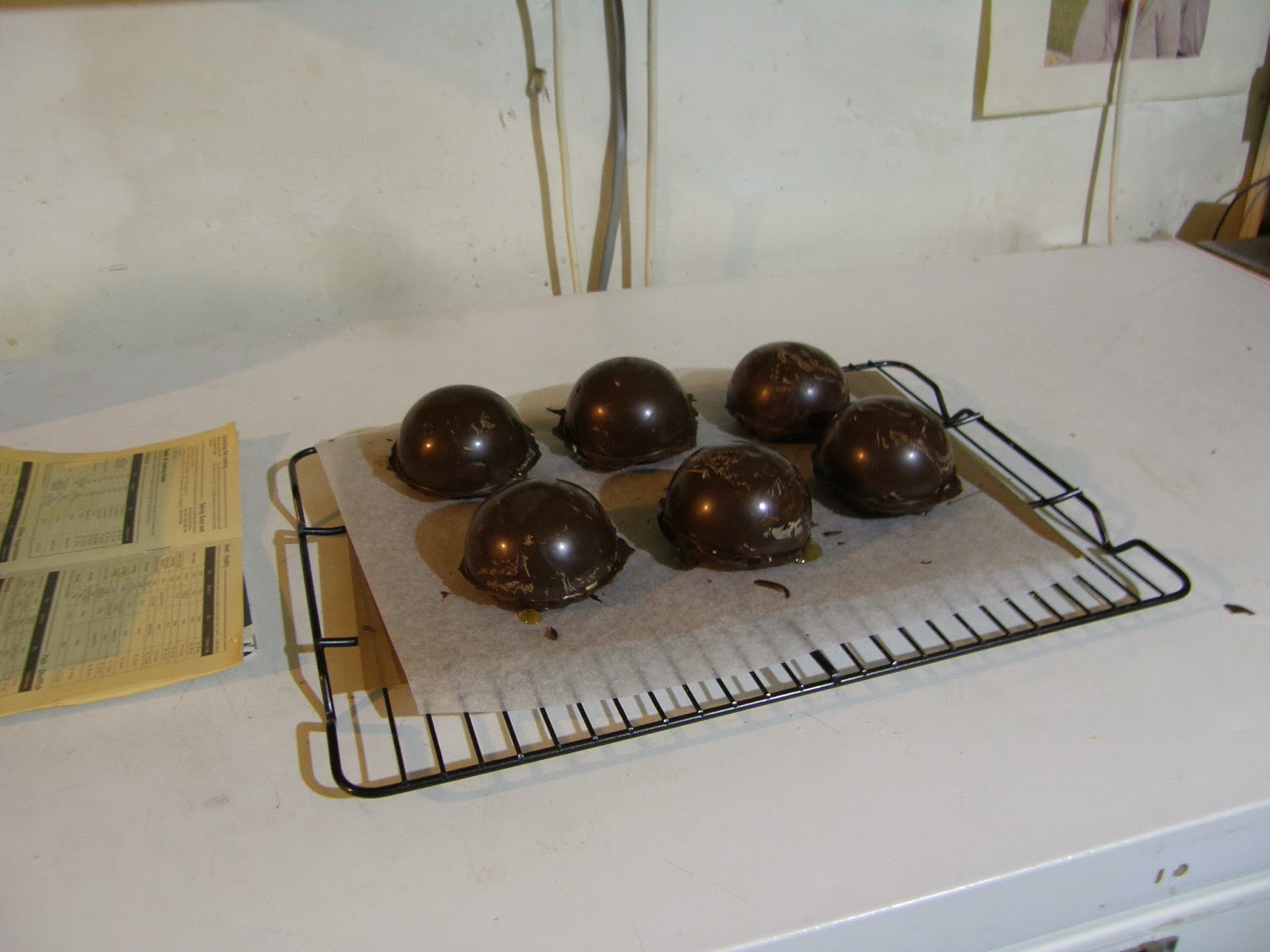 Now I have to say that they take ages to make. First you melt the chocolate and leave it to cool. While that is happening you make the biscuits for the bottoms and after they have cooked they have to cool totally ot the chocolate won't set on them. While they are cooling you take the cool but still molten chocolate and spread it into the mould, easier to say than to do and you have to keep turning the mould around so you don't miss any bits. Then you come to the energetic part of the process. Making the marshmallow.
The recipe says that it is preferable to use an electric whisk for this bit. I don't have one so I now have muscles like knots in cotton from using a rotary hand whisk. Trust me you need an electric hand mixer because you put the ingredients into a bowl over a pan of simmering water and you whisk until they are all mixed together and standing in stiff peaks. My arms shook for ages after I had stopped whisking and the sugar did separate out a little afterwards where I hadn't quite kept going long enough.
While this cools down you use the chocolate to dip the biscuits and leave those to set and then fill the chocolate covered mould with cold marshmallow then put the chocolate covered biscuit onto the top and seal them with more melted chocolate and leave to set again.

I used the waiting time to sit and read - and wait for my arms to stop vibrating. When Mr M came home from work last night he had his sausage casserole and then a marshmallow as his pudding.

I have to say that the combination of vanilla marshmallow with chocolate and biscuit took me right back to birthday teatimes in my childhood. I think I might have to buy an electric hand mixer just to see if the marshmallow is better ... I want to make them again but not too soon
Posted by Ladkyis at 04:05

since you bought the mold, you are going to have to make them again! Now with the purchase of a mixer, you'll need to make them several times to make the cost worthwhile. Still, they sound delicious!

I know exactly what you mean about the Lakeland catalogue!....these sound and look delicious...but too 'faffy'' for me!!
Alison xx

My goodness you have some patience to make those.
I find the Lakeland catalogue always has lots of things I didn't know that I needed. ;)

These look absolutely wonderful! Well done you for all that whisking by hand!