Me on Monday Injured and hurting 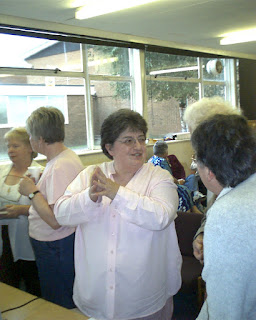 It's been a fixed the car, shopped at Costco, shopped at Morrisons, read hurtful things about me on a forum, made sunday dinner and cut my finger, allowed both hurts to get to me sort of a weekend.

The car has been fixed so no more water is escaping through grotty pipes. This is the good thing. We shopped at Costco and forgot some essentials but bought a fly zapper - one of those blue light thingies you see in food shops. Mr M has wanted one for years so it sits up on the top of the cupboard and glows bluely. I sneakretly like it too, it is a gadget and I do crave gadgets.

Saturday YS went off to his school reunion - I am not sure I understand these things other than that they are a place to show everyone you hated at school how well you have done in the intervening years. If you haven't made the effort to keep in touch then those people will probably not find a niche in your real life. But there you are, even though family history fascinates me, looking back into my past is not something I do very often .... unless there's a good story and then I can reminisce with the best of you. I walked out of school at the earliest possible moment and never looked back I kept in touch with one person afterwards but even that link has gone now.

I posted some useful information that our local FH Society had on their website onto a genealogy forum. I said that Parishchest.com had sent out an email to all the traders on their website telling them that PC would be closing down on 10th August. A lot of people who didn't know this immediately emailed PC who f*cking denied it and went onto another forum to tell people not to believe the rumours! Then a member of the forum where I put my post - in all innocence I might add - had a go at me for spreading rumours and untruths. It was explained to them that I had posted and 9.22pm and they had posted on the other forum the change of mind that they were now looking at selling to someone else and not closing at 7.01am the following day.

Did I get an apology? of course not, one of the posters on the other forum even went so far as to hint that I posted out of spite. I have not and will not post on the forum where I originally posted and I am not allowed to post on the other forum because they refused my membership - because of what the woman from PC said about me. This festered over the weekend and was not helped by cutting my finger on the grater-plate of my food processor. I don't do things like that. I rarely cut myself but I had successfully grated carrot and stuff for the coleslaw and when I was washing the plate it turned in my hand and cut my ring finger on my left hand just on the edge of my nail. BOY did that hurt and I bled like a stuck pig, all over the sink and the drainer and the floor and the tea towel and the roll of kitchen paper and the table and Mr M as he was being the ministering angel and sticking a plaster on it.
Feeling a lot better for having got that off my chest so my thanks to Sian for inventing Me on Monday. and Thank you for reading this
Posted by Ladkyis at 04:52

That sort of online bullying is horrible and I feel for you. It's unwarranted and PC should come clean and tell the truth, but they won't will they. I hope you manage to put it behind you, and also that your poorly finger heals quickly. Sending you {{{hugs}}}.

I hope you find nothing but love here on your blog.
Rinda

Sending a huge retrospective wave and plenty of good cheer from over here. Wish I could do more! And I hope the rest of the week is a lot, lot better.