Me on Monday - relieved to have him home

It's been a getting Mr M to the hospital for his minor surgery, worrying most of Saturday until I got him home, sleazing on Sunday until Dinner with the Bluefunnels sort of a weekend. 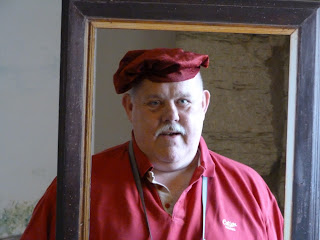 Mr M has been waiting for six months to go in for a small operation that for anyone else would be a day case and home. Because he has diabetes they have to ensure that they cover their asses and make sure his sugar levels don't spiral out of control and stuff like that. He had to go in on Friday after work. He didn't finish work until 8pm so YS took him down - his own plan was to drive the car down there and park it in the car park and then when he came out drive home. We persuaded him otherwise, thank goodness and so I woke up after a fitful night's sleep and from 5,30am and was NOT worrying.
He sent me a text saying he was second on the list and then what seemed like days later he texted to say he was waiting for the discharge papers and his phone was dying. I changed my shoes and collected my handbag and went to the hospital, found him and this got things moving so that I could text YS and he came and collected us.
It was decidedly good to have Mr M home and as YS and the rest of the family were all out celebrating a 50th birthday we ordered chinese food and sleazed.
On Sunday I checked my tomato plants and picked four - yes four! lovely tomatoes. A message from Lady B asked if we felt like travelling up to their house in the clouds for dinner. YS had never been up there so we all trooped up the hill and enjoyed a really relaxing evening with good food, good company and a huge amount of laughter. There was gravy so Mr M asked for his bib before he started his meal but it was me that ended up with the dinner medals all down the front of my shirt. This reminded me why I don't eat gravy.
Lady B is recovering well from her knee replacement - well according to everyone else she is way ahead of where she is expected to be in her recovery but as far as she is concerned it is too slow, much too slow. It is four weeks since her operation and she still has swelling and she can't run yet!! Everyone else is gasping for breath at the speed of her recovery - ah it is so good to see that some things never change. She never did like waiting
So that's Me on Monday, invented by Sian over at FromHighInTheSky why not take a look over there now that you've read mine.
Posted by Ladkyis at 08:11

I'm delighted to hear the patients are doing well..that's the kind of Monday I like. Great picture: he has a look of one of the talking portraits in Harry Potter about him.

I hope this week is a good one, now that the op is over and done with

I'm glad that all went well and he's back home safe and sound!

Keeping my fingers crossed he continues to recover well.
Rinda

It's always such a relief to have someone out the 'other side' of any surgery...hope he continues to improve xx

Glad everyone is recovering - all of it has a lot of worry, so good that it's now the days after. Hope you have a good week

That's a great portrait - I could have sworn he'd stepped out of an Elizabethan drama ... Good to know that he's home and all's well, and hoping you can relax after your sterling efforts to get him there and back.