Me on Monday - meals on wheels 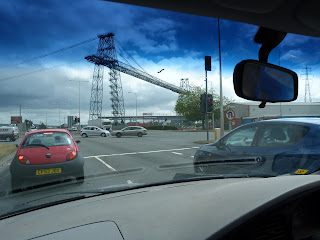 It was a nip out to take the tetrapacks to the tip and buy birdseed and find nice yarn instead, a let's get fish and chips and take it to the Bluefunnels for dinner because Lady B is incapacitated, put two loads of washing on the line and stare in amazement as rain falls like (as we say around here) stair-rods, a let's get the tomatoes watered even though said stair-rods should have been enough, a "Mum remind me to buy milk" "we have a cows nest in the fridge so take two from there" kind of a weekend.

Mr M suggested that we should take the bagful of tetrapacks to the tip before they do him permanent damage. The bag hangs on the side of the cupboard and as it fills it sticks out enough to catch his shoulder every time he goes to the bathroom downstairs. I don't notice it as it is over my head. He added that we could go to "Buyology" where they always have stuff we desperately need and get a bag of seed for the wild birds. So we picked up the bag and off we went. We remembered to take the used batteries too. Buyology only had peanuts. Sparrows don't really care for peanuts, the last big bag we bought went mouldy. we moved on and I managed to get anoth contender for 6. A Metal Bridge in the Summertime Scavenger Hunt - our lovely Transporter Bridge.
We had arranged with Lord and Lady B that we would pick up Fish and Chips and take it up to their eirie because Lady be had a new knee just two weeks ago and while her recovery is happening it is not going as quickly as she had scheduled. Lady B cannot bear to be idle so the enforced rest is driving her insane and yet her trauma to her body is not going away even though she has shouted at it. I am sure that she thought she would be able to cope with the pain without the major league pain-killers and now feels she has failed because she has to take them. I have probably said this before when talking about Lord and Lady B but as an only child Lord B was and is the closest I have to a baby brother and when he first brought the girl who was to become his wife to meet us we found an instant connection that has continued for the rest of our lives. We are not the same, oh no but we think the same thoughts and laugh at the same things and if I called her and said "I need you" she would keep me on the phone while she was running for the car - new knee or not.

I put the washing on the line while Mr M did a grocery shop on Sunday and I was so proud of myself for getting two loads of washing out onto the line. As he returned with all the bags of groceries the heavens opened and dumped a river onto the road outside the front door.
Later that evening I went down to see if anything was dry enough to bring in and on checking the tomato plants I discovered that they were really dry.
My daughter popped in on her way to play tennis with Miss Boo and mentioned that she would have to buy milk. For some reason we haven't used as much as usual so I told her to take a couple of bottles from the cows nest - there were 11 pints of milk in there and only the two of us this weekend.

So that was me on Monday. This was invented by Sian at FromHighInTheSky so why not pop over there now that you've read this.
Posted by Ladkyis at 12:07

some lovely phrases that are new to me - the cows nest and raining stairrods and yes I know people who are pretty sure the body will heal after being told to. Have a great week

What a great read :) You are packing a lot in these days..hurray once again for the doctor who finally got it right. Have a really good week

Isn't it amazing that it can rain so heavily yet the plants still need watering!? xx