Me on Monday - limping again 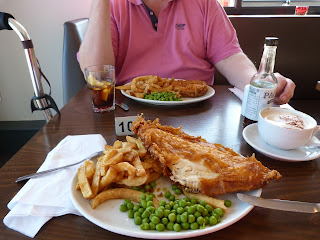 It's been a good grief where did the week go kind of a weekend. A hugging unexpected visitors, avoiding cooking, going grocery shopping and taking painkillers for that darned twanged muscle kind of a weekend. It has also been a strawberries from my own plants eating kind of a weekend and a counting the tomatoes forming on the vines too. Also it was a finding out that my cuz was already in hospital and had her new knee while I was thinking she would be going in this week kind of a shocking weekend

Coming home from our weekend on a Monday threw everything out of kilter and it was Wednesday for three days. We settled in on Saturday morning to a I'll-just-get-this-washing-out-and-then-we'll-go-out kind of a day when I got a message on FB from someone we dearly love. Would we, he asked, be available for some visitors?
I conveyed the query to Mr M who gave me a delighted smile and said yes. I sent the message and we waited. I did other things like eat some strawberries off my four plants and check the tomato plants for sideshoots and the bean plants for signs of flowers. Then suddenly they were here and we were hugged and even though Pax Draconis really doesn't hug he had to submit. His partner, Doberman A, does hug so that was great. We did the teabag experiment* and tried to cram as much talking about stuff into as short a time as possible.
The twanged muscle keeps re-twanging itself, this is such a darned inconvenience and I prepared to have a real good moan and be a bit of a martyr about it. Then I discovered that my cousin had her operation for a new knee last week and is now recovering and that put my pain into perspective, so I rubbed the offending area with Voltarol Gel and I will be elevating my legs just as soon as I finish here

*Teabag experiment: Where there are unidentified teabags in the same tin as the airtight bag of green tea and you know you only bought one pack of green tea so they have to be brewed and tasted. They were mint tea

MeOnMonday was invented by Sian over at FromHighInTheSky why not pop over there and read hers now that you've read mine
Posted by Ladkyis at 03:45

I hope that twinge sorts itself out very very soon. My friend and I were out for a cup of tea the other day and she asked for green and the girl brought mint..because she thought "it was probably pretty much the same". You and I know that's not quite true..

I hope you get your leg sorted soon as well, that can't be much fun.