Me on MOnday - The Ninja Cat of Ilminster

It's been an Anniversary celebrating, five days on our own, Wolf Hall costumes, Ninja Cat experiencing, laughing till I fell out of bed,  Donkey sanctuary visiting, Gift wrapping a Castle kind of a weekend.
Barrington Hall was the second property on our list of places we wanted to visit. the first was Lytes Cary Manor (say it fast and see what we call it). Barrington Hall is wonderful and weird and was the setting for several scenes in the Wolf Hall series and there is a display of the costumes from the series. The stitching is just amazing. All the visible stitching is hand done and I believe that the costumes were made according to the way they would really have been done in Tudor times. 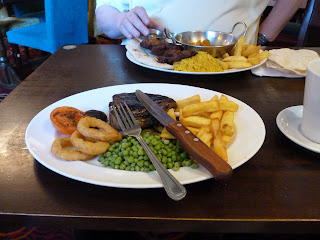 Anniversary Dinner at a Hungry Horse The Stone Gallows at Taunton. The food was fabulous and my medium steak was done to perfection
OK so now let me tell you about the NInja Cat of Ilminster. We were staying at the Travelodge at Ilminster, on the ground floor. The windows only open a little way so that unwelcome intruders can't get in and unsacoury people can't throw the furniture out of the windows and make off with it. We had been out all day visiting places and eating and came back to the hotel about 8pm - dirty stop-outs that we are. We read our books and kindles and talked. We listened to the cast of Riverdance practising upstairs and eventually we settled down and went to sleep. We were woken at around 2am by loud Miaowing outside it was only for about half a minute and it stopped. We dozed off again and around 2.30am the miaowing began again. Mr M decided to have a look and shoo the cat away. He got out of bed and went to the window. Now the curtains in the travelodge hotels are pretty effective at blocking the light so he reached for the curtain to pull it open and pushed the cat back out of the window! Somehow it had managed to wiggle itself through the little gap into our room.
Mr M was so shocked he stepped swiftly back before grabbing the curtain and then shutting the windows. I started to laugh and sit up and fell off the bed. Fortunately I landed on my feet or it would have taken a crane to lift me up again.

Castle Drogo is 2 years into a 5 year programme of conservation and repair which is seeing the roof removed and a special membrane put in and then the roof put back. To do this they have to remove part of the walls too and the stones are numbered and mapped and then stored. it was so interesting even though we couldn't see the rooms as they usually are just learning about the work and how it is done was fascinating.

To finish our break we came home via Tiverton where we visited Knightshayes - designed and built by William Burgess who also did Castall Coch and Cardiff Castle. amazing, although a long walk from the car park to the house when Mr M has poorly knees and my twanged muscle was making my tendon click. All together a fantastic weekend and just what we needed.

Me on Monday is the brainchild of Sian at FromHighinTheSky why not pop over there and take a look at hers now that you've read mine.

Snap! I'm off to Knightshayes on August 3rd.

It sounds like you had a very busy, fun weekend.

My brother wants to open a donkey sanctuary when he retires!

I'm more than a little bit envious over those Wolf Hall costumes. That exhibition has my name all over it.

Have a great week!

That sign is intriguing! Sounds like you had another good time! You have more adventures than anyone I know!