Me on MOnday - Strawberries, visits, and new slippers dance 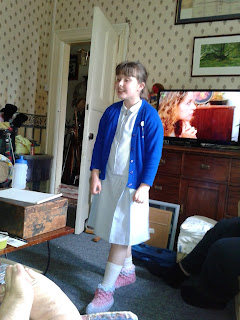 It was a garden centre, Gang Show visitor, down off the high, connect four and hangman and saying goodbye, then new slippers from Grandma sort of a weekend

We "popped out" to a garden centre to get a couple of strawberry plants. I have a trough that held a Rosemary bush until I killed it and as this is the year of the garden for meI want all pots and troughs to be planted. I came home with food for the tomato plants and lovely smelly slug pellets for the slugs that are eating my clamatis and a little blue flowered thing I have forgotten the name of to go in another pot. OH and a sage plant for my herb sink.
We paused to visit my lovely Father-in-Law, who puts up with my constant chatter and even manages to get a word in edgeways occasionally. He is going to save me some seeds from his yellow poppy plants and give me a bit of his Dicentra as the chickens ate mine.
When we got home Wicked Uncle Cliff had arrived to go and watch Miss Boo perform in the Gang Show presented by Newport Scouts and Guides. For those that understand these things the Assessors have awarded them the Red Necker for another five years so loud hurrahs were heard. It was late to bed but not too late because WUC was feeling decidedly unwell. We discovered that he had taken Ibuprofen earlier on Saturday and it had an adverse effect.
Sunday was a slow start and a sit around and talk and talk. we haven't seen WUC since New Year and it is always good.
Early to bed on Sunday and then on Monday I filled the trough with compost from my own bin and planted the strawberries. I cut up the cardboard box that has been in the cellar since 2009 when we bought the chicken house and I moved the compost bin from one side of the garden to the other - then had to call Biker Boy to come and shovel the compost onto the garden and the not quite ready stuff back into the bin. Then I planted the sage, put out a load of washing on the line chatted to the lovely Debbie who lives next door and is  just about the best neighbour you could ever hope to have.
Then I came in and elevated my legs and that's when Miss Boo came home from school and tried on the dragon scale slippers - they fit and she is thrilled.

That's me on Monday - knackered. Why not take a look at Sians blog over at FromHighInTheSky
Posted by Ladkyis at 13:16

An action packed time! So glad the slippers fitted - she looks very pleased with them :).

That sounds like an excellent weekend. I'm delighted that the Gang Show was such a success and that the slippers very..very satisfying! What are you going to knit next?