Me on Monday - Doing it better 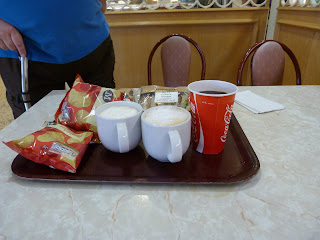 It was a surprised by a panic attack, curled up knitting, waking up on Sunday feeling better, going out for breakfast, then home again, home again jiggety jig - but going the pretty way - a total of 200 miles kind of a weekend.

We were going to go out on Saturday to do the trip we intended to do when the car got sick. I was fine right up to the moment............... no I was worrying right up to the moment when Mr M said "Ready to go?" I was so not ready. My heart suddenly started pounding and I couldn't breath, my eyes leaked all down my face and I just shook my head and crawled into my chair. This is what happens when you allow your mind to over think something. I stayed there knitting and watching TV until it was time to cook dinner for YS and Mr M.
Sunday the black dog was gone from my back and even though the weather was cloudy and humid I suggested that we should go out for breakfast. We did. We went to Jo's in Whitchurch and then moved on to a special shop just outside Ross. It is called Bailey's and they have the most marvellous stuff there, perfect for wedding presents and birthdays that have a zero in them - really good stuff, some antique some recycled some brand new but none of it mass produced. As there is a very special birthday (with a zero in it) coming in this family we had to go and see what was there. Did we find something? well you will need to be here and reading in October to find out.

When we go out for "a little ride" as Mr M calls it there are a few things that govern where we go.
1) we rarely have a final destination in mind when we set out
2) There are driver and screwdrivers. Which is in front of us at a junction can decide which way we turn.
3) Where can we get to from here? We stop to look at something or to get a cuppa and Mr M consults the map in his head to see where he can go to from there.
4) It is not possible to get lost in this country. You are never more than 75 miles from the coast so if you forget exactly where you are it won't be long before you see a signpost or reach the sea.

From Bailey's we headed somewhere else, changed direction because there was a tractor just up ahead on the road we were going to take at some point we went through Upton on Severn - it was shut - and found our way to the Staunton Garden Centre in Staunton and Corse. We also passed by The Hop Pocket - lots of overpriced pretentious sh*te stuff in there and finished up in Leominster - gosh that's where the OK Diner is,yes? Yes. We looked through the doors as we pulled into the carpark and there were at least six people waiting to be seated so we came straight out and went to Morrison's just up the road. They have free crisps with the sandwiches so we stopped there. Once again the coffee machine wasn't working - this seems to be the thing in Morrisons at the moment. Lunch time and the milk runs out.
We then pootled through into Powis and came home the pretty way, Waving to Cousin Andrew as we passed by his house. We always wave and say hi, rude not to really.

and that was Me on Monday. My thanks to Sian over at FromHighInTheSky for inventing this neat way of starting the week. You could go and read hers now that you've read mine
Posted by Ladkyis at 07:43

Glad to hear that you sent the Black Dog running and enjoyed your jaunts about.

I'm glad to hear you were able to push the dog away and get out and about. I'm looking forward to finding out what you chose in the shop.

Hoping you keep fit to get out again during the week

I have no sense of direction so panic when a diversion appears or my husband decides to take a 'scenic route'. He however has brilliant sense of direction and just seems to know which way to go (thank goodness!) it's a talent I wish I had!
I wonder what it is that you bought!