Me on Monday - Mundane? Hahahahahaha 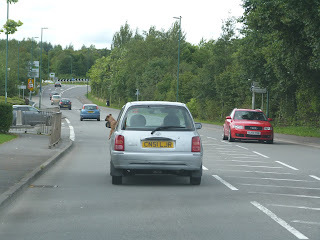 Its been a "I quit my job" "OK now they've listened I won't quit", shopping at The Range, lunch disappointment, Oh, so this is Marshfield,  see the dog out the window, sleaze all day Sunday.

My friend's neighbour once asked us how we coped with such a mundane life. I often think of that moment when the mundanities pile up in a messy heap and threaten to overwhelm me.

Youngest Son arrived home of Friday and told us that he had quit his job because the transport manager (he drives 40ft articulated lorries delivering frozen stuff to stores) had seemingly ignored the fact that YS had booked Sunday off and had scheduled him to do a 15 hour shift on Saturday, knowing that if there were any delays it would mean a night out when he ran out of driving time. As YS hasn't had a weekend off in six weeks he was a bit peeved. Several hours later and his depot manager had rung him as well as two of his fellow drivers and he had agreed not to quit - yet.

Saturday we went to The Range. We were looking for Chinese five spice. We bought a magnifying sheet to use for the family tree, a new handbag for me, a flat cap for Mr M - the picture will follow later, Something for The Birthday, tape for the label machine and then we left, no five spice in that bag of goodies.
We went for lunch more about that here and then decided to go up to Ebbw Vale to the Festival Park. We went via Marshfield, because we could. I bought two more handbags - BOGOF so it would be rude not to and Mr M was able to buy two fly swatters for a pound. Still no five spice. on the way home - via the Heads of the Valleys Road we saw this dog hanging out the window of the car in front. Now call me a worry wort if you like but the woman was on her own in that car and the dog was loose. What would have happened if the animal had seen something it had to chase, or something it recognised, or something that terrified it. We could have been involved in a traffic accident caused by her stupidity and the dog could have been hurt. I wanted to drive along side her and scream abuse but Mr M shut our windows and stayed back

So it was another normal weekend then? oh yes, quite mundane really

My thanks to Sian for inventing this little bloggy meme
Posted by Ladkyis at 05:54

I can't remember who said it, but someone once definitely pointed out that it takes more courage to live an ordinary life than an extraordinary one. Yes! Sometimes things trundle along and then all of a sudden two or three things happen at once..

...and no matter what happens, you get a good story out of it :) I hope the job thing settles down and that there is some good stuff in the rest of the week

I like Sian's quote (above comment) but really how rude of someone to make a judgement on your life. I know those feelings of "I quit, I've had enough" work kind of days. Thankfully I am getting fewer of those days. So my good thoughts for you this week are, that it is an ordinarily lovely week for you :)

Thanks for your earlier comments on my blog, it's been a while LOL. Sometimes i think that we dont always see the value in the mundane but quite honestly I sometimes yearn for those days.