Me on Monday - Super Grandma 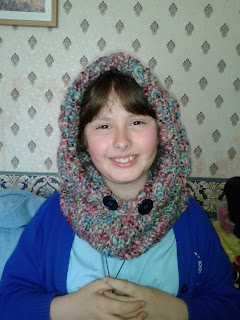 It's been a buy a new phone for Mr M, let's do the blankety blank shopping to day and get it over with, roast pork dinner with home made trifle for supper, a thank you for my new cowl/hood grandma kind of a weekend.
We went to Carphone Warehouse and talked to a very nice young man who explained the pricing - I mean three different prices for a phone? He then looked at Mr M's choice and checked to see how much cheaper he could make it. So one upgrade and a bit of faffing later amd Mr M now has a touch screen pay-as-you-go phone for less than fifty quid - very nice. I nipped across to M&S cos I needed bras and they are my favourites and came out with two new sets of pyjamas as well - they had a £5 off lingerie voucher which was very nice and then they gave me a 20% off sleepwear voucher with my change... be rude not to I thought and as the backside was hanging out of my old PJs the timing was perfect.Mr M stayed in the car and played with his phone so he was happy and so was I

We decided that as we were already out that we would do the grocery essentials shopping. By the time we got home we were both fed up and grouchy so we made a cuppa and then sat in companionable silence playing Farm Heroes Saga and chatting on Facebook.

Sunday I cooked the roast pork early and left it to rest as this makes it easier to slice. Youngest son was starving when he arrived home from work so I piled their plates high with meat and green veggies and carrots and then remembered that I had only half made the trifle in the morning.
They were happy to eat it a little later I finished the experimental knitting of a hooded cowl for Miss Boo and when she came home from school today I gave it to her to try. She has gone to Brownies wearing it and I was called Super Grandma when I said yes she could keep it. I think it will work better in thicker yarn so I am off to Loveknitting now as they have a 10% off sale on chunky and superchunky - gotta go!

That's me on monday. My thanks to Sian at FromHighInTheSky for inventing this way of keeping me regular. You can take a look at her Monday now that you've read mine
Posted by Ladkyis at 10:59

I love that cowl hood. I would love one 😊

Hey Super Grandma, that is one very lovely looking hood. (Surely there must be a Little Red Riding remark in there somewhere. I just can't think of it at the moment..)

Buying a new phone is the one thing makes me want to crawl into a corner and rock. Why does it have to be so complicated? Sounds like you got it all sorted well though.

Sounds like you've had a successful weekend! Love the cowl for Miss Boo. She is absolutely precious! You deserve your title!