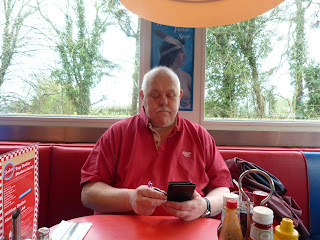 Sometimes, just sometimes I am reminded that I am so very lucky. We went on an exploratory trip on Saturday. The aim was to seek out a good place to take the Bluefunnels for our first excursion of the year We kind of headed out towards Abergavenny but a closed road diverted us.
Next we were stuck behind a moron in a blue car who took up two lanes of dual carriageway and waited on roundabouts for a car to come round - even if there wasn't a car in sight when we got to the roundabout. He took the road we intended using so we went straight on ... I bet his ears were burning.
we intended going through Gilwern but the roadworks meant that we travelled for what Mr M's Nan called "This ages" past what use3d to be the turning so we gave up and headed for Brecon. The intention was to head towards Llandeilo but as we came to the roundabout there were more roadworks so we decided that we could be in Leominster (pronounced Lemster, for all the non-locals) in about an hour and it would be lunch time and the OK Diner is there and we didn't go there for his birthday.
By the time we got there I was desperate for a cup of coffee and the Loo so while he went first I ordered the drinks and then I went while he thought about the food. I like the OK Diner because they let me have a Mushroom and Cheeseburger without the bun and this means that sometimes I have room for a dessert - not this time though.

Mr M sat waiting for food and texting his Wicked Step-Daughter to gloat about where we were and I had a little oh lucky me moment.
This man puts up with me, let's face it he took on quite a task when he got together with me. I was a divorced Mother with three children who were all in their early teens and had the potential to be extremely difficult. He never ever lied to them, gave them unconditional love and here we are 36 years later. He still makes my tummy do that funny lurch when I see him unexpectedly. I miss him from the moment he goes through the door to work and I am waiting for him to come home.
Being reminded of how I feel is just marvellous

My thanks to Sian over at FromHighInTheSky for inventing this meme and keeping me writing
Posted by Ladkyis at 11:19

How lovely to know you still get that 'lurching' feeling....counting our blessings is good for the soul! xx

A lovely post like this is nice to write and to keep; but it's also great for the rest of us who, after reading, start to look around and think..yes: life has some very good bits

I hope the pair of you have a great week

Aww, you two were just meant to be together. Lucky for the both of you, I'm sure.

Oh what a lovely post - glad you ended up together both in life and in the OK diner :)