In Search of the Dolgellau - A Remembrance

We're going on a bear hunt ... no, sorry, not a bear hunt we were seeking out the exotic spawn of the Dolgellau. You don't understand? I'll have to tell you the story. Are you sitting comfortably? Then I'll begin...

A long time ago (in the olden days, as Miss Boo would say) in 2002 we went to Portmeirion for a week with some wonderful friends all of whom enjoy playing with words and creating fantasy out of the mundane. There is a town in Wales called Dolgellau ( pronounced Doll- geth - lee).
A previous holiday group had decided that this name looked like it ought to belong to a mythical beast. A legend was created. Our group contained enough of the originators of the myth that when I asked for details of the beast I was given special access to hitherto untold information and documents.

One of those Documents I reproduce here for your edification and delight.

The Dolgellau (pron. Doll- Gell - Oww) is a unique creature that claims the area of Britain to the North and West of Welshpool as its domain (and I for one am not intending to argue with it)
Descriptions of it vary from viewer to viewer but two things remain constant through all observations.

No specific details of it have ever been recorded - anyone who got to see more than its one footed nature has either perished at its hands or become one of its minions.

Detection of the creature has so far proved somewhat tricky - although its mournful lowing can be heard throughout the region; The strange and uninspiring nature of the sound makes any investigator too disinterested to follow it.
Many fine naturalists have been sent to find it and all have come back complaining of the weather and discussing the nice tea-shop that they had some lovely Welsh-cakes in.

What has been slightly more thoroughly investigated are its offspring. Although the Dolgellau is a unique creature it is known to immaculately spawn two different races of servitor creatures. These are the Strange and Enigmatic Slow Araf and the Enigmatic and Strange Araf Slow.

Both of these creatures have their own fiefs within the Dolgellau's domain and they are terribly territorial, marking their lands with strange white symbols as a warning to those of other species 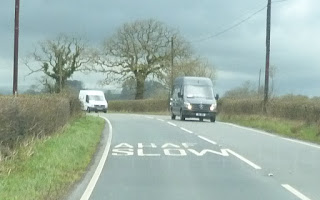 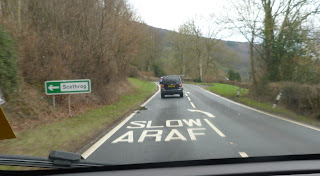 The frightful Slow Araf is a mischevous beast about the size of a small man or a large bicycle with three legs and a large probing snout.
The despicable Araf Slow is slightly larger at the size of a Raleigh Chopper or Bernard Breslaw, with dry matted fur and five legs.
Although rarely seen one photograph does exist - although, sadly, the photographer did not survive long enough to tell us which type of creature it was whose face so fills the frame.

For many observers it is believed that the town that shares the name with the creature is the best vantage point for sightings. However, I firmly believe that this is but a front put on by followers of the one-footed one to put us off the scent. The clues are clearly there in two obvious distractions:
1.   The town pronounces the name wrongly by inserting a throat-clearing sound on the second syllable and then a totally inappropriate sound for the third.
2.   There are many very nice tea shops that all serve Welsh-cakes.

For many this has forced them to look slightly further afield and a more recent suggestion from the Welsh Institute of Monodexter Monster Hunting is that the creature rests its aching body in the un-naturally warm waters of Llyn Trawsfynydd.
Although this is appealing it also seems to beget another blind from an organisation whose association with the creature has been questioned for many years. Again why do they suggest somewhere so close to the usually suggested haunt - and again why does the large industrial complex on the lake do such a great line in glow-in-the-dark Welsh Cakes?

This mysterious village is as unseen as the creature itself. Totally unreachable by road it is apparently accessible by foot from almost anywhere in the creature's domain.

Across desolate moorland or even at the tops of mountains the signs to this mystical place can be made out. Unfortunately attempts to follow them fail for even the most devoted pursuer of the creature.
However, even this humble observer has noted that upon the paths to this place none of the normally ever-present territorial markings of the creatures off-spring are to be found.
Also there are no teashops.
Proof, if proof were needed, that this seemingly non-existent place is the creature's true home.

This document shows that
1. I have the most amazing friends
2. Google can translate most things
3. The spawn exist!

I've always wanted to visit Portmeirion - I shall now be on the lookout for strange beasts too.

Most enjoyable! I can tell you that I've noticed both the Araf Slow and the Slow Araf up in Norht Wales near the coast, so it clearly likes to roam :).