Today we were OUT. All day. 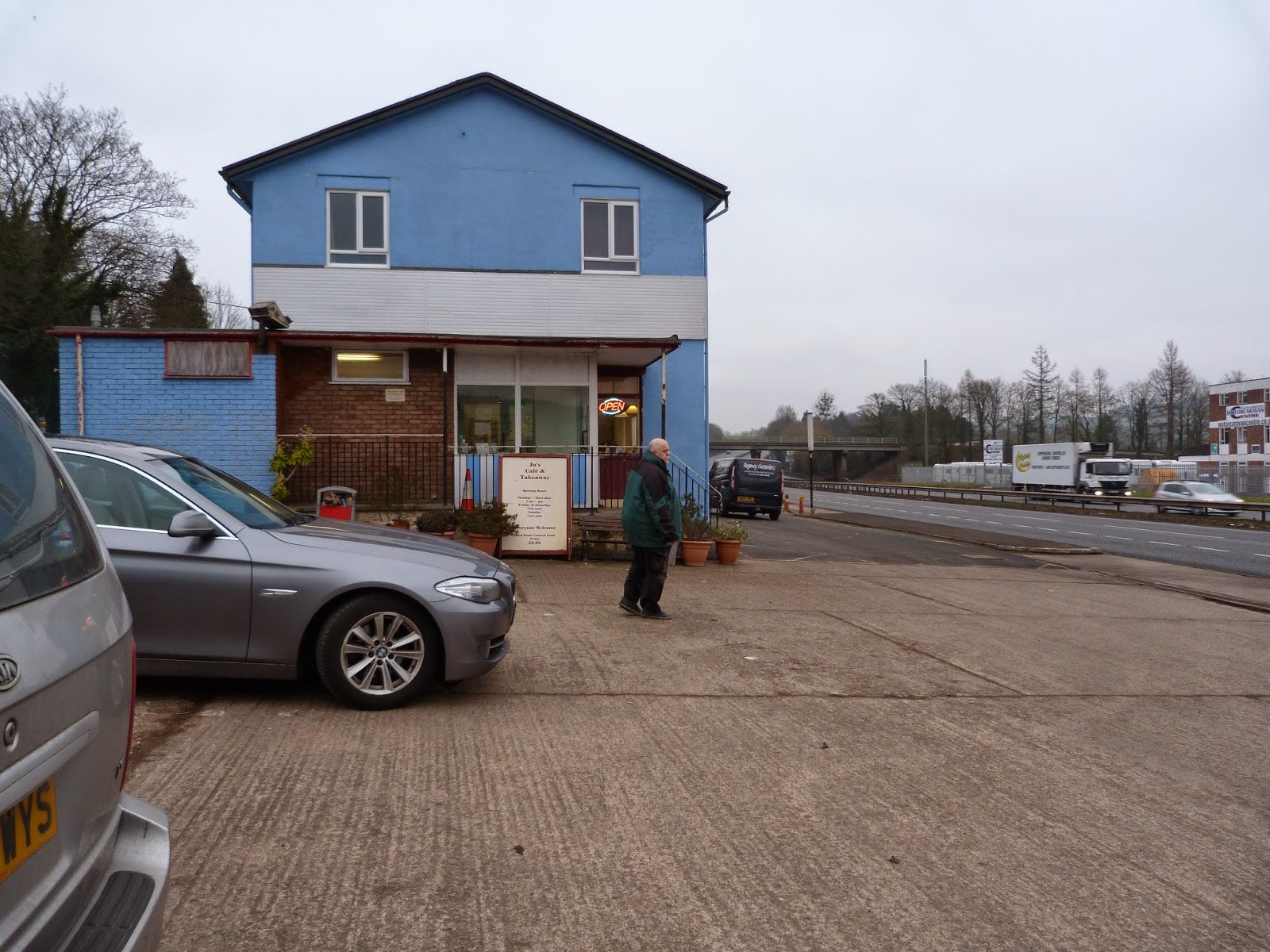 It is Mr M's birthday and we try to do something just for us. This year he decided that he wanted to visit Baddesley Clinton, a National Trust property not far from Warwick. But first we had breakfast at Jo's Place.

I nearly managed to get a picture of breakfast but I was too hungry and too slow to remember. 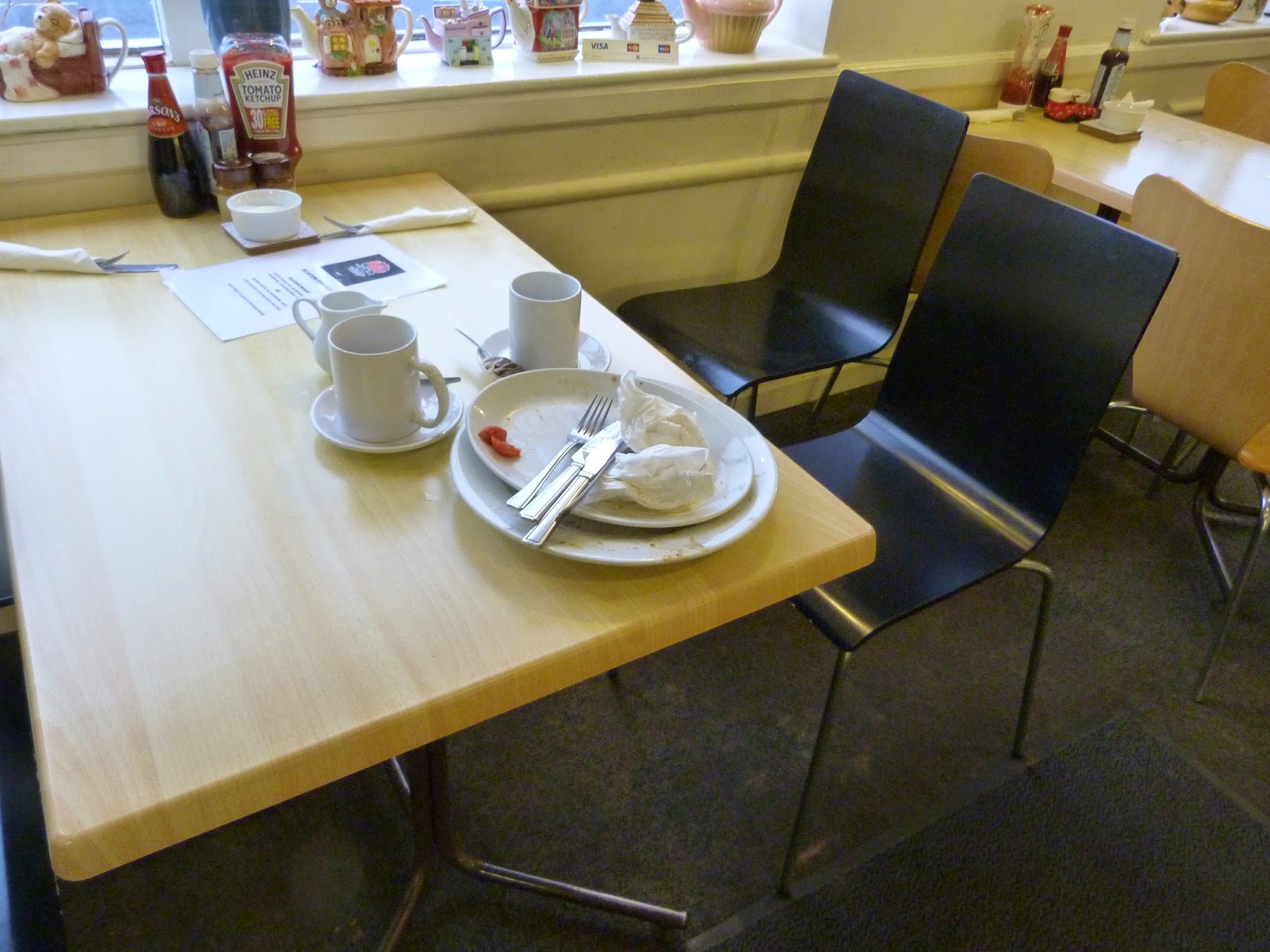 We had directions from Google Maps but the junctions and roundabouts were mystifying so we took an unexpected tour around Warwick. This was dead good as we had never been there before and as we had no idea how we had got there this time we thought we should pay attention. 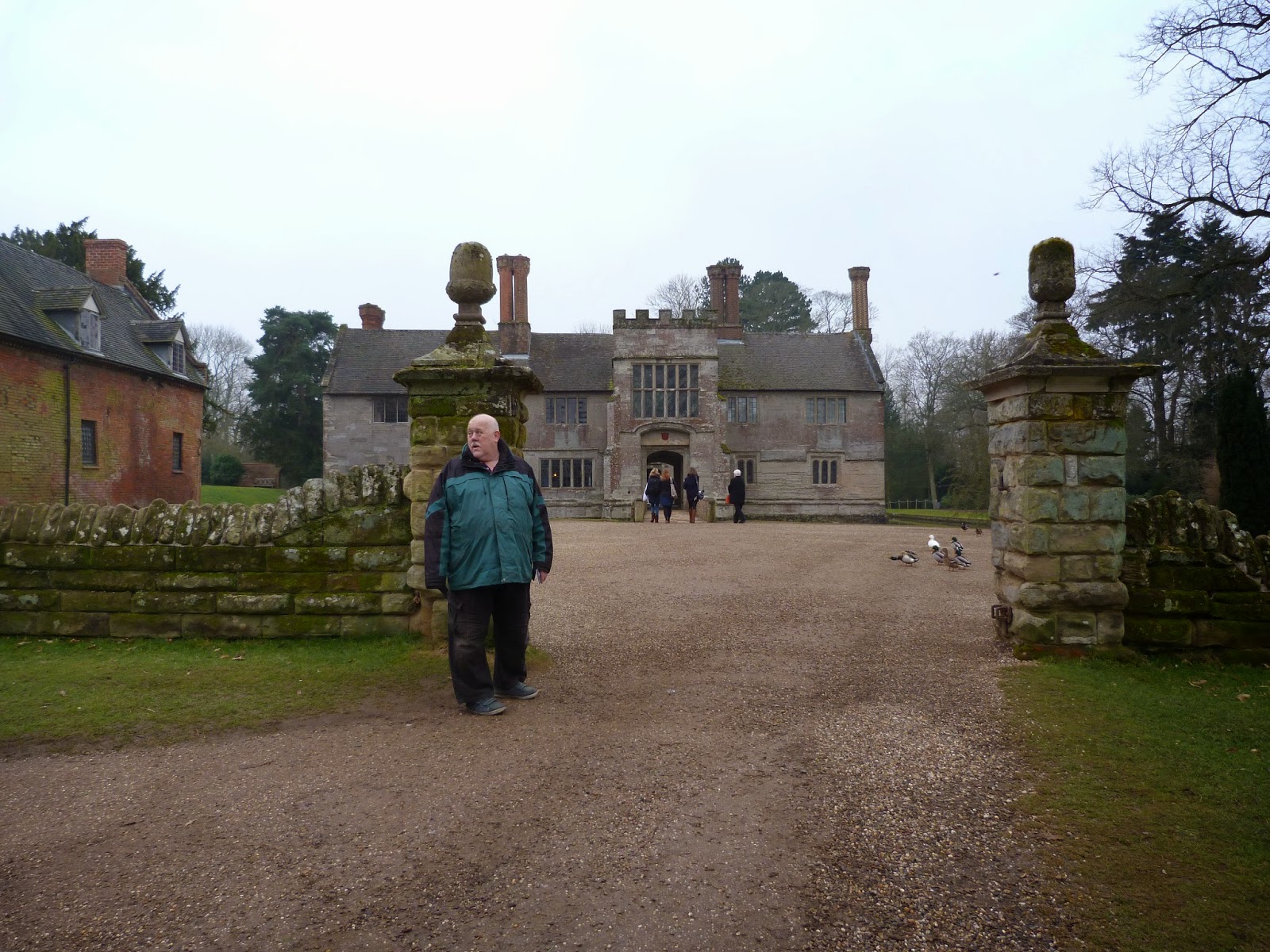 Baddesley Clinton is a moated manor house built in the early 1400s and altered extensively every hundred years since then. It has a couple of Priest holes and odd staircases and steps everywhere. Some of the internal walls used to be external ones and the wooden framing can still be seen from the early Tudor times. 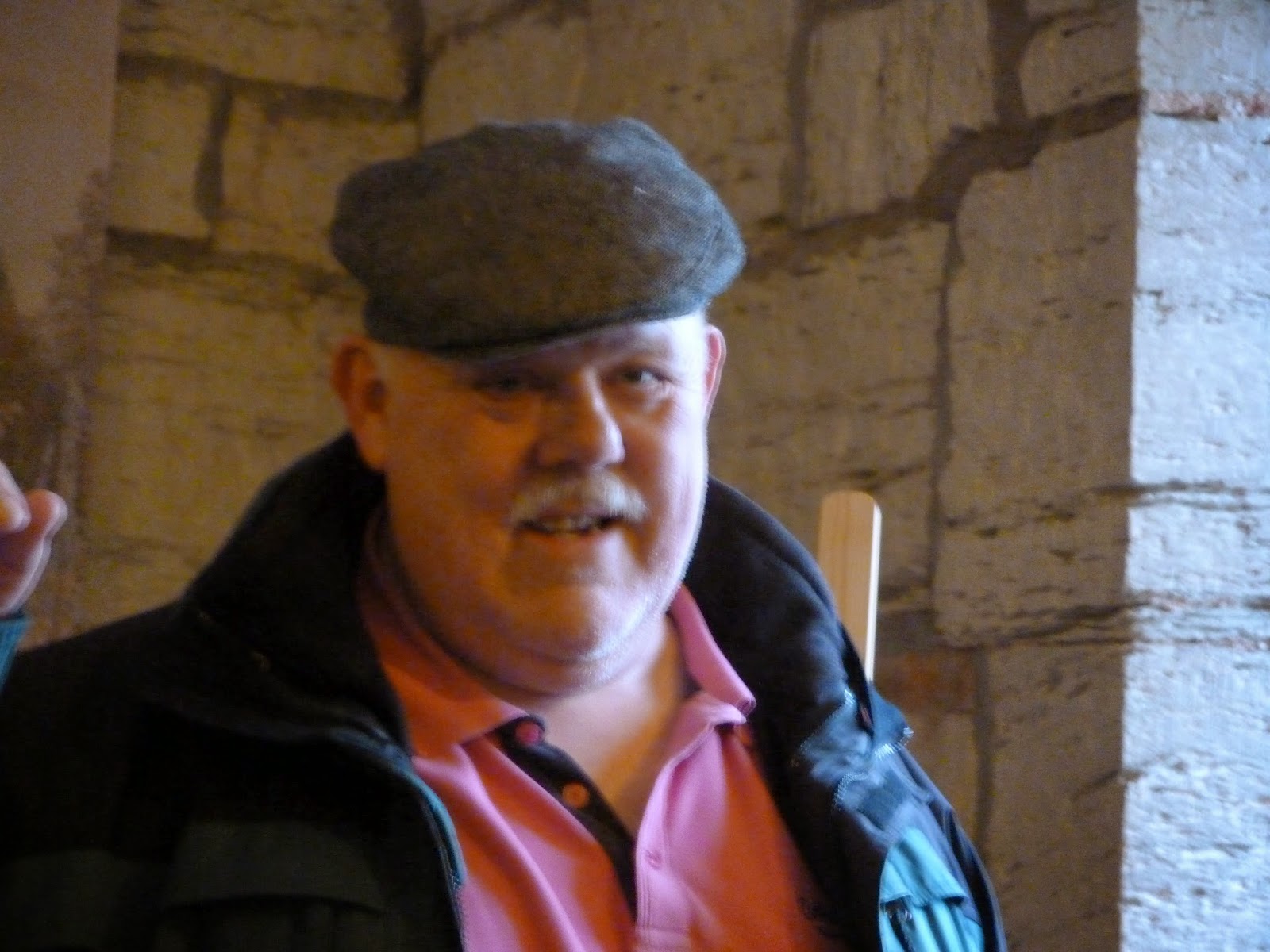 Most National Trust properties now have lots of things you can touch and pick up and really look at which is fantastic. They also all seem to have a selection of hats and the tradition has grown, because of our outings with the Bluefunnels, that hats must be tried and photographed - so here's the birthday boy wearing the last in a large selection. 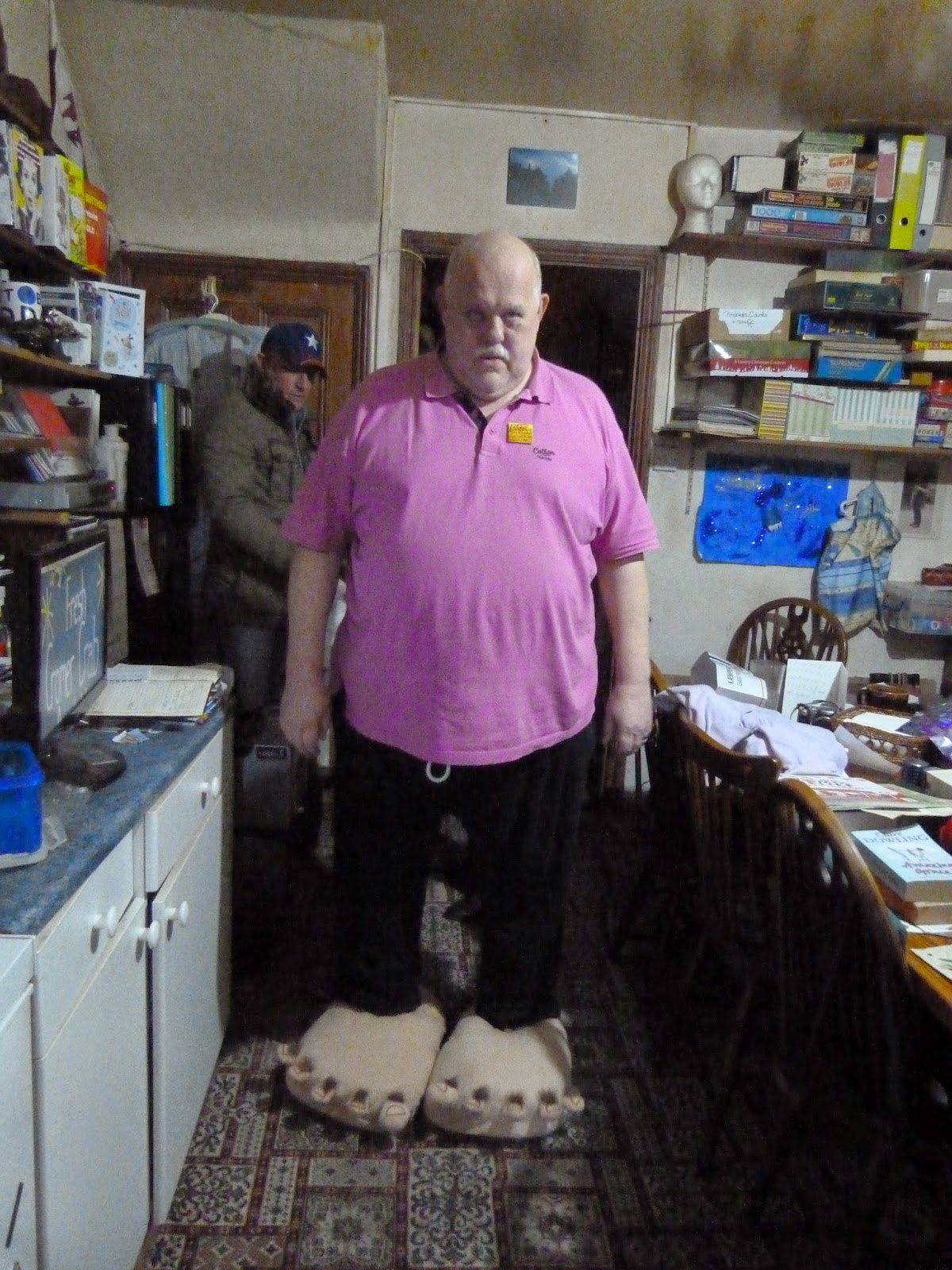 When we got home Miss Boo brought he beloved Grandpa his present. Can you see? These are new Earthquake Slippers!

Did it make us laugh? oh yes, especially when he did the new shoes dance. What a birthday memory!
Posted by Ladkyis at 12:17

Happy birthday dance to Mr. M! You seem to have had a lovely day together despite the time of year and the vagaries of Google Maps :).

Birthday slippers? Wonderful! My sister once bought Dad duck slippers ... Mum said he wouldn't wear them, but he did. For years after he'd gone, we used one as a doorstop (we filled the foot part with sand and stitched up the opening). I wonder if Mum still has it ...
A belated happy birthday to Mr. M!

Happy birthday and what wonderful slippers! Glad he had a lovely day.