Not even a flake

I really do feel for my friends and family who are snowed under with.... snow. My Cousin Pete in Canada has been putting pictures of the snow on the railroads in Saskatchewan and trust me it makes our snow look like a light dusting. However, I didn't want to be left out of the fun so I thought I would show you this. 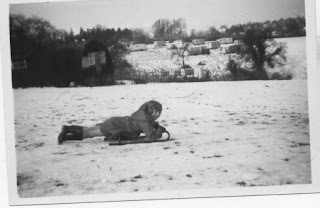 I am about eight and riding on a sledge made by my Dad - he did wrought ironwork and made steel gates and stuff. In the background you can just see the Nissan hut that we were living in. We moved into a bungalow built by my Dad in front of the hut in 1957 and the field I am in was sold for building and the same time. The thing that amazes me is that I am wearing a skirt! ok so I have wellies on and that coat was genuine Harris Tweed but even so bare legs! Just shows you how hardy we were in 1954.

A skirt! That is amazing. It is a lovely picture..bet you'd still give the sled a go given the chance

What a great photo! The skirt is priceless. Thanks for sharing,
rinda