This story is part of Storytelling Sunday three- My Precious. Created by Sian over at From High in the Sky why not go over and read all the other stories AFTER you have read mine. 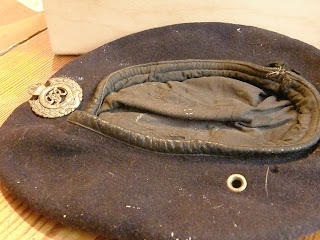 This is my Dad's beret. The badge has lost its little lug on the back so it is no longer attached, and hasn't been for as long as I have memories. Dad wore this beret when he was working. I don't know if it was part of his wartime uniform and he just kept on wearing it or whether he picked it up in a "job lot" at an auction. Probably the latter. 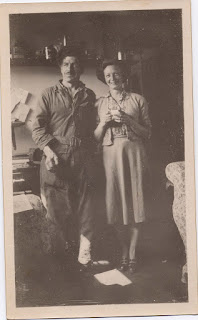 This is my Dad wearing the beret on the back of his head. This is the memory that the beret always conjures in my mind of my parents in the corner of our living room where the "office" was. This picture was taken between 1948 and 1956 because that's when Dad finished building the bungalow and we moved into a proper house with brick walls.
The beret still smells faintly of him. A mixture of engine oil and straw with just a faint hint of brylcreem. He and Mum came to live with us after Mum had a stroke. He didn't want to be here, he wanted to put himself between her and all the dangers of the world but he was struggling with his own physical weakness where his war injuries were finally taking their toll. He hated having to ask for anything so his last few years were hell. I didn't know he had kept the beret until after Mum died. They were living in a nursing home and Dad died in 2003. Mum amazed everyone by continuing to sit contentedly listening to audio books until 2006 when she faded away. Only then could I open the boxes of stuff that Dad had deemed essential. I still have some that I haven't opened yet but I am getting there. The beret was in the bottom drawer of his chest of drawers. I thought the chest contained clothes and such because it was in their bedroom and, well, that's what chests of drawers usually contain.
When I tugged at the drawer I first thought that it was locked until I realised that there wasn't a keyhole. Mr M was called and he gave a great heave on the handles and the drawer opened about six inches to reveal all my father's woodworking tools. Planes, chisels, screwdrivers, saws, you name it they were in there and tucked into the corner was his "housewife" a linen roll with pockets that contained needles and thread and scissors and small scraps of fabric and a couple of buttons - and the badge! The beret was underneath everything. I gave the tools to my eldest son to go with the lathe bequeathed to him by my Dad. I gave the box of car-related tools to my other son. The wooden bowls and plates he had made over the years went to my daughter. I kept the beret and the badge and since last year they have been kept in my special box.

Thank you for reading this. Now you really should pop over to Sian's Place and see what other delights await you
Posted by Ladkyis at 01:12

Thank you for posting this..reading it was an absolute pleasure. As soon as I saw the picture, I thought I could imagine a little what it feels and smells like because I used to have an old cricket cap of my dads - and then as I read down I found you describing what I had been imagining. Wonderful. It's precious, for sure and I like it very much.

So evocative and poignant, thanks for telling us about these things.

What a wonderful story! Certain smells still bring back memories of my father. I don't think we ever lose those associations.

What a beautifully written story x Many thanks for sharing.

Such a wonderful precious to have. I love it when you can still 'sense' the person who had worn a piece of clothing. Very special to you I am sure.

how lovely that you have that reminder of your dad, so precious x

Thank you so much for sharing this beautiful part of your father's story. Some objects can encapsulate so much!
Cheers from France

Your story send chills down my spine. What a great gift your Dad left to you and your family. Thanks so much for sharing.

Engine oil and Brylcream - such an evocative picture those two scents conjure up. Like Sian I was already smelling it and was touched to read your description. Glad that you have it and were able to spread the bits your Dad left behind to his grandchildren.

I have some very strong associations with smell and your beautifully told story reminds me of them today.

Oh what a lovely story of your precious. I enjoyed hearing its whole story and how his other keepsakes have been passed down. Thanks so very much for sharing with us.

Oh that really is a precious possession. You described it so well.

What fantastic recollections. It is amazing the treasures which are found after someone has passed on!
Rinda

What an absolute treasure and so lovely that you have a photo of him in it.

This was lovely to read. How wonderful that you were able to give so many memories to your children of your father with his tools and plates.

What lovely memories...and so great that your children all have a little piece of history too!
Alison xx

That really is so precious, thank you for sharing your memories x

What a wonderful story, it has made me feel all warm and fuzzy, thank you for sharing it and sharing all the treasures out among your family.

What a wonderful story - mentioning brylcream brought that smell right back to me. Was there any man of that generation who didn't use it? You've reminded me I must go back through my Dad's things that I've got tucked away in a special box.

I am glad that you have something precious from your dad. Sometimes exploring an item with all of our senses brings back so many more memories than we thought we had.