We went to Gang Show!

We went to Gang Show on Friday night. I was going to tell you about this before but I got sidetracked by a family get together.
Now some of you might not know what a Gang Show is so here's a brief explanation.

In 1931, Ralph Reader, then a Rover Scout who was trying to make his mark in theatre in the USA and London, was asked to write a Scout based amateur variety show to help raise money for a swimming pool at Downe Scout Camp (now a Scout Association National Activity Centre). Rehearsals commenced under Reader's direction on 25 May 1932 (his 29th birthday).[1]
Initially the show did not have a title, but during a rehearsal break, Reader recalled later, he asked a cast member if everyone was ready to which the response was "Aye, aye Skip, the gang's all here". The first production, under the title The Gang's All Here ran between 30 October and 1 November 1932 at the Scala Theatre in central London.[1]

I looked on Wikipedia 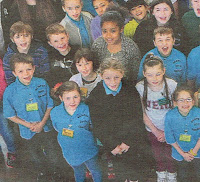 Miss Em has been going to rehearsals for the last eight months on every other Sunday afternoon. She was told to keep it a secret from Mummy and Daddy so she refused to rehearse when they were around, always being a very literal child.

We had no idea what to expect but we were bowled over by the performances by the children. They had worked so hard and their efforts meant we had a wonderful evening.

If I then go on to say that the stage direction was loose and sloppy and the choreography was so dire I just cannot describe it BUT through all that the children were wonderful and while there were differing degrees of ability the sense of team work and their genuine enjoyment of the performance made it all just one of the best evenings I have spent in a long while.

I longed to stand up and clap my hands to the music and make them at least get on the beat. Instead I interlaced my fingers together and held them in my lap while I silently mouthed the words of the songs.

Miss Em says she wants to be in the next one too, so perhaps they will have a better director by then. Roll on 2015 for the next one eh?
Posted by Ladkyis at 09:49

I think years from now all they will remember is how much fun they had and nothing about the direction, etc.
Rinda