Me on Monday - Educational journey 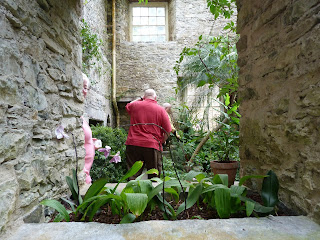 We went out with the Bluefunnels on Saturday and everyone knows that we always have an adventure with them.
The Lord Admiral drove because when he has his new knee it will be several months before he can get behind the wheel again. Their new car has loads of whistles and bells - and warning bleeps when you stray out of your lane. We hear that one quite a lot because there were so many other whistles and bells to play with and the Lord Admiral likes things like that. Lady B was sitting in the back with me so she could nudge his seat to keep him straight. 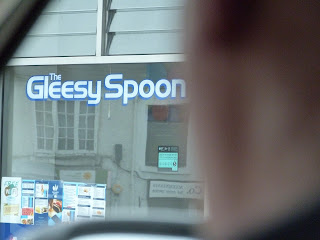 We went to The Rest Cafe here in Newport and had a delicious breakfast and then, with the Lord Admiral driving and Mr M directing we headed west. We took them to Aberglasney. There was a short stop at the West End Cafe in Llandovery because we needed a loo break so we had to have a cuppa and the gentlemen had an "iced slice" simply because they had some.They had never been before and thought it was lovely and Aberglasney was jolly good too. We had a cuppa in the tea room and admired the gardens while dodging wasps. As I am seriously allergic to wasp stings I kept my head down and let Mr M do his usual thing of giving the wasp one warning to go away and then... well, they usually go. 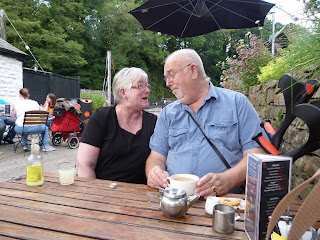 I expect you are wondering where the educational bit comes in, yes? We talk about stuff all the time in the car. All sorts of stuff and during the course of these conversations I learned that the slighted tower at Caerphilly castle leans more than the leaning tower of Pisa, I learned that we must never eat at the Don Cafe (as I don't know where it is I shall avoid all cafes called Don) and the third thing is that I learned that we now have a Hungry Horse Pub in Newport! Yeah!

From Aberglasney we went over the hill and round a bit until we reached Gorslas and then we stopped at the Cwmcerrig Farm Shop. OH this place is fabulous. The produce they have there is just awesome and they breed and grow their own meat too. The also have a restaurant.............. pause while I wipe the drool from my lips. Mr M and I had the pork dinner; three good slices of beautifully roasted pork, a maximum of four roast potatoes, a choice of about six other vegetables and then gravy. good thick pork gravy.............oh yum. Lord and Lady B had pie. Minced beef for his Lordship and beef and ale for her ladyship.Then we shopped. Did I say the produce was awesome. The whole place is so good I forgot to take pictures
Our Journey home took us past the Gleesy Spoon so I took a picture for the "signs" album and we stopped at Aberdulais Falls for a loo break and a cuppa. I think my picture of Lord and Lady B is really good. She is NOT giving him an earful of grief, she was laughing at something he said - OH OH I can use this as my "someone Laughing" picture for the Scavenger Hunt.

You are making me hungry..

I'm sure I'm not the only one who is glad that keep on coming back and writing a bit more :)

Wishing you a good week ahead

What a lot of fun your friends sound ... ah yes all the new bells & whistles in cars, too many. Happy week ahead.

It sounds like quite the outing. But I'd narrow down exactly the place you need to avoid, why eliminate other possibilities, I say.