Me on Monday - pictures 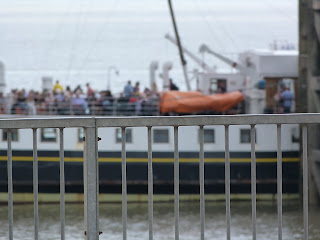 You have probably realised by now that Mr M's hobby is driving and mine is being with him so most weekends we go out to do something - deliver books to a grandchild, find some mixed herbs, look for new sandals because mine fell apart in Amroth. That sort of thing and usually we travel for a while to achieve this. 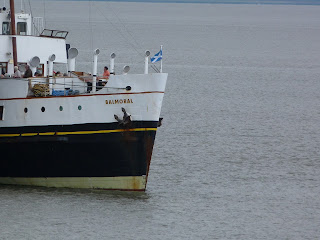 Then we are free to do what we want and usually this consists of Mr M saying "Where do you fancy going?" and me replying in a whining voice "I don't knoooow" Then he will say "Hurrrumph" or something similar and point the car in a random direction. Then he will suddenly say "We haven't been up this road before" and all hurrrrrumphing is forgotten as we are embarking on an adventure.

We went out for lunch on Saturday. To the Oyster Catcher in Penarth Marina - well not exactly IN the marina that would be silly - and wet - but close enough to watch the boats in the river and the people all around. The traffic was horrendous so when we had eaten we went up to the roundabout and headed for Penarth sea-front. We knew we wouldn't be able to park at that time on a Saturday but we had to drive slowly anyway because everyone does so I could take pictures. 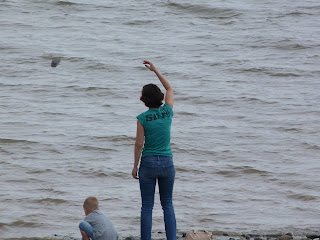 The Balmoral was moored to the pier! How exciting! She is one of two paddle steamers that have regular runs in the Bristol Channel during the summer. She goes from Penarth or Barry or sometimes even Newport if the tides are right and she travels across the Bristol Channel to Ilfracombe (in this house for reasons that are now totally obscure it is pronounced Ill - frack - comm - bee) So there she was and I got all excited and suddenly there was a parking space so Mr M parked and said "Someone playing by water - loads of people fishing" and I had the chance of another scavenger hunt picture so I nipped out of.......... ok I clambered slowly out of the car and tried to scurry down to the lifeboat 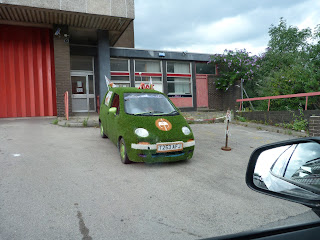 ramp so I could take pictures.

There she was. A Mum playing with her child by the water. As I raised the camera she threw a large stone into the water and I thought "Please do that again and let me catch it" and she did!

We then headed kind of north west -ish and Mr M asked the satnav to find a Morrisons so we could get fuel. It took us to Porth. We had never been there before so that was interesting. The Morrisons there doesn't have a fuel station so we stopped to use the loo and have a cuppa and learnt that the people in Porth don't use the trolley cupboards either. You know those huge things that you can put your trolley of shopping into while you go for a cuppa? well, in Porth they are actually in the cafe so Mr M started to laugh and told me to look. Outside the row of cupboards were four trolleys full of shopping. By the time I turned and picked up the camera it was too late, the little old ladies had scurried down the aisles and reclaimed their shopping. The disappointment was lessened when we were nearly home and Mr M said "look a car with astroturf" I managed a picture of that.
Apparently it has been parked there for several days and Mr M had seen it when he came home from work.

It sounds pretty much perfect. We like this kind of a trip too..though our indecisiveness means it can take us a while to work out where to go. I think I need to make a lucky dip bag of potential destinations.

Wishing you a good week ..maybe with another trip to look forward to at the end of it

Sounds like a lovely bit of wandering - I do like a fun day of looking at things.