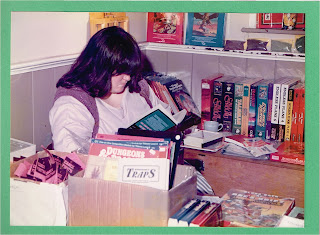 This is Louisa. She died of a brain anurism ten years ago and she was my cousin. At one time she worked in a laboratory that tested water. She could really tell a story. This is one of hers.

The storage room where they kept all the glassware and equipment for the lab was very untidy and so Louisa and the cleaner began to sort it out. They had a bin for broken or damage stuff, they cleaned off the shelves and decided that alphabetical was the way to go. In each catagory they sub divided by size. This was fine until they came upon items that had to be in the store room but were not for use in the lab - they were unidentified.

Louisa designated a box at the end of a row of shelves as "The Miscellaneous Box" and they put all the unidentifiable bits in there. Most of them were grey. It became the Misc grey bits box

Can you see where this is going?

I knew you would.

The box remained at the end of the row of shelves for the next five years, until the lab was closed and the testing moved to another part of the UK. By this time there was a phrase that had become part of our family language.

"File it under Misc Grey Bits" and we still do.

Today Louisa has been in my mind because I was sorting out a drawer in the kitchen and thought to myself  Where shall I put this? oh I'll file it under Misc Grey Bits" and there she was with that wicked grin and the droll sense of humour that would leave your ribs aching from laughing.

Missing you girl
Posted by Ladkyis at 05:08

I miss her sense of humour and her laugh.

What a nice little homage for your cousin 10 years after the fact. I think everyone would be happy knowing that someone still thinks of them later.

Having a memory that makes you smile so many years later - and a phrase that is now part of the family lexicon seems a worthy legacy.