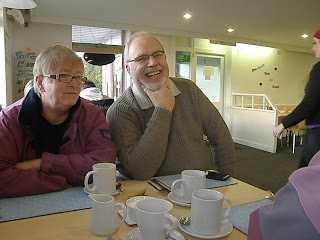 Today we were up and out of the house by 7.30am because we were going to Hereford with Mr and Mrs Bluefunnel. This meant we had to stop for breakfast and where else could we stop than Jo's Place on the A48. As usual the breakfast was fabulous and set me up for the day. I just can't put into adequate words how much I enjoy our days out with Mr and Mrs B. 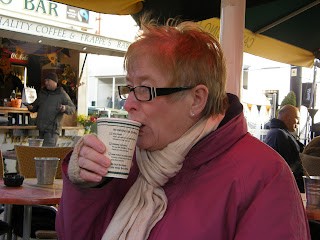 Mr B is my cousin and he is more like a little brother to me. We have always got on well, even when we played Monopoly. When he met Mrs B and introduced us it was like he had given me a sister - more than that - he had given me someone who thought a lot like me and liked a lot of the same things and yet was so different to me that we got along like a house on fire. I'm digressing.

When we got to Hereford it was still not quite 10am so the farmers' market was still opening up and a lot of the traders weren't ready for customers. We were forced to sit down and have a cuppa. There were lovely heaters under these umbrellas and the tea and coffee was just gorgeous. 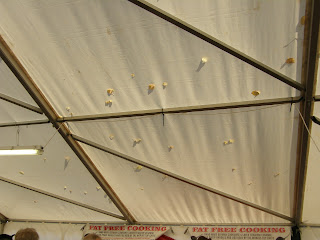 Then we made our way into the traders tent for the food thingy and Mr M pointed to the roof. It looks like the leaves are dangling from the roof when they are actually lying on the outside, because it is a tent! I took several pictures but none of them really show it too well. 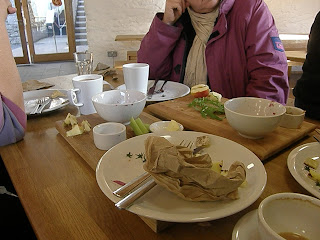 While Mr and Mrs B sat down and had a coffee Mr M and I went to see the Mappa Mundi. This has been on my list of things to see before I die for ages and although we have been through Hereford hundreds of times we have never stopped and walked about before. I highly recommend a trip to Hereford Cathedral just to sit quietly in the Nave and listen to the history whispering to you is fantastic but to be able to see a map of the world, drawn in the 13th century is just amazing. We also sat and stared at the chained library. I have to say that it brought Terry Pratchett's books to mind where the books in the library of the unseen university are chained to prevent them opening and spilling their magic. The ones we were looking at were chained to stop scholars taking them home. What an experience! 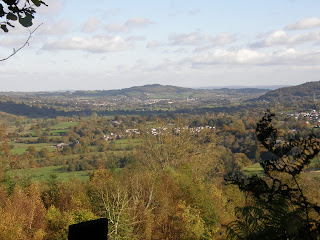 We walked until Mr M's knees were giving out and Mr B's were right there with them, creaking and aching together we all limped back to the car. It was the Bluefunnels turn to drive so when we got into the car Mr B asked the satnav for the shortest route somewhere - on the way home - and then we had to follow exactly what the lady said. If we saw something we wanted to look at we could stop but we could not deviate from the route. Shortest doesn't mean quickest. It can mean going up teeny tiny lanes and over mountain tops... a magical mystery tour.
It took us through Talgarth and as the Mill and Cafe were open we stopped and had a late lunch which was just superb. I took a picture but the food was took fast to catch it all I got were the empty plates. They make their own bread from flour ground in the mill and they use local produce - pickled red cabbage, ham, cheeses, fruit, celery, salad, that was all just yummy. I am not a big fan of chutney, it's usually too sweet for me but the apple chutney that came with our food was so delicious I had to stop myself eating Mr M's portion too.
We continued with the mystery tour and at one point we were high above the town of Govilon looking across to Abergavenny in the far distance. It was a little country lane that eventually came out at Black Rock.  Not the one by the River Severn but the one above Govilon near the Heads of the Valleys road. We then went up through Llanhilleth onto the mountain and came down through Pontypool to home.
We had a simply fantastic day, found some good Christmas presents for a couple of people and stuffed our faces with great food.
Oh I bought a 5 kilo bag of pickling onions for £2.99 which is really good value and also two huge cabbages for my chickens for a pound for the two.

I love that area! Hereford Cathedral is amazing :) I love the Mappa Mundi, and yes - the chained books are very Pratchett!

Your thorough enjoyment of the day makes for very enjoyable reading!

I'd love to see the Mappa Mundi before I die too, That and the Bayeux tapestry

We never got to the cathedral but my parents did - the course Ewok & they did was in Hereford so they had lots of time there. I do like magical mystery tours.

We saw a copy of the Mappi Mundi at the British Library's map exhibitions - along with a map of Terry Pratchett's Discworld complete with insert of 'L space' :)