Were you invisible today, Grandma?

I have often felt invisible, you know the feeling don't you? Sometimes someone will prove it to be true. They bump into you and then say "Oh, I'm terribly sorry, I didn't see you." and as they are so obviously not visually impaired you have to believe that until they touched you the invisibility spell had made you....well, invisible. 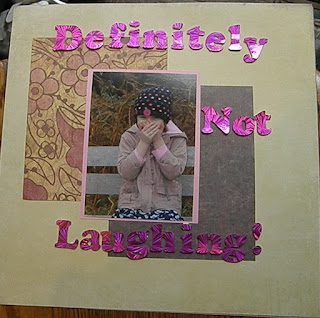 This was something we discussed when we played Advanced Dungeons and Dragons - AD&D for those of us who are in the know. Just how invisible was invisible? We decided this: If you cast an invisibility spell on yourself then you can see where you are and you can see your hands and feet and stuff like that but everyone else can't. If you think about it for too long it makes your brain creak and start to smoulder. In a different game system there was an invisbility spell that worked as long as no one touched you. Once that happened you became visible again. This is how it works in real life. You are invisible until they touch you and then you can be seen. Then the spell takes hold again and you disappear, until someone touches you.... The problem is that you don't always know when the spell is on, until someone bumps into you and says "Oh, I'm sorry....."

What's all this leading to? Well, yesterday I was waiting in the school yard for Miss Em to come out of school - This is something that has helped me no end and I can do it every day without a panic attack now.
I was reading my Kindle and in the space of three minutes three different people bumped into me and said the usual "Oh, I didn't see you." It just so happens that they were all men, and none of them said sorry. They made it sound like it was my fault. I was a bit cross because they were rude so when Miss Em arrived with bags and water bottle I told her that I must be invisible and why I thought this. She agreed that it must be a spell but that it only made me invisible to people who weren't my family because she could see me when she came out of the door.
Today she came skipping across the playground and as she reached me she said, with the bell-like clarity of voice that only a seven year old can produce. "Were you invisible today Grandma? Or did the rain stop it working?"
I chuckled all the way home
Posted by Ladkyis at 13:18

Absolutely brilliant :) Set her on those rude men x

This goes back to your previous post for me - you have such a wonderful blogging personality that it scarcely seems possible you could be invisible :) I think sometimes people simply have too much on their minds and they are caught up in their own thoughts as they wander along