The first Sunday in the month is Storytelling Sunday. This is brought to you through the lovely Sian over at FromHighintheSky. Why not go over there after you have read my contribution and take a look at all the other stories from around the world.

The story that sprang to mind when I read Sian's suggestion for this month isn't long, it has only one photograph but does, once again involve Mr and Mrs Bluefunnel.

It takes place in the mid 1970s in the village of Raglan - famous for being the last Castle to surrender to Cromwell's forces in the Civil War (This was the English Civil War in the 1640s not the American one a bit later)
Every year the village held 'Raglan Day' on August Bank Holiday Monday. Every organisation in the village had a part to play. There was a craft and horticulture show. The Junior Football Club ran the Five-a-side-football competition. The Girl Guides had a welsh cakes stall. The Boy Scouts had Mr Deakin and his win a fish stall where my three children won a fish each and I had the invisible one (I will explain later). Young Farmer Club did the skittles and the guess the weight of the piglet (boy was that noisy when people picked it up to try and guess) The cricket club organised the bar and various other events took place on the sports field during the day.
The main event was the carnival procession. The Carnival Queen was chosen from the village school and she sat on the back of a decorated lorry with her four attendants. There was always a celebrity or "important Person" to open the proceedings and give a little speech that no one could hear because the sound system never worked. The Celeb would then hand out the prizes to the entrants who had dressed up and processed through the village to the sports field.
Mr and Mrs Bluefunnel loved it and always thought of good costumes. Mr Bluefunnel went as the incredible hulk one year and they made me dress as wonderwoman. Thank goodness no pictures were taken (I am the picture taker you see so when I am dressing up the camera stays home.
This particular year - 1974 - Mrs Bluefunnel decided that she would make a large cardboard box look like a book and with her head sticking out the top and her legs at the bottom she would be a book worm. I wore a tailcoat with a dress shirt, black trousers and a flat cap and flippers on my feet, and had a large sheet of paper on my back proclaiming me to be a Penguin Paperback.
Mr Bluefunnel and my first husband both wore kilts and army jackets and became MacFish and MacChip. Macfish had a set of bagpipes that he had bought on a trip to Scotland but he couldn't get a peep out of them so he put a cassette tape player inside the bag and played the tape of the Royal Scots Dragoon Guards Band playing the introduction to Mull of Kintyre. This was great as long as he remembered to stop it and rewind before Paul McCartney started to sing. 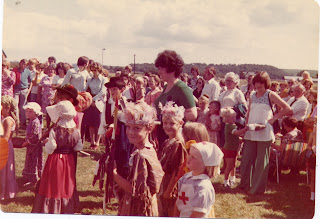 My boys dressed up as Indian Braves. The only time we ever managed to persuade them to do this and I have a picture of them that was taken by a lady from the village and she gave me a copy.

At the end of the day MacFish and MacChip took the children home while Mrs Blue and I collected all the prizes they had won on the various stalls and all the other stuff that had been borrowed and squeezed it into her Fiat126. We visited the win a fish stall last and collected the little plastic bags with the goldfish in them. There were four bags. "There are four bags, John," I called to Mr Deakin. "Yes" he replied, "the fourth one has the invisible fish in it."
We nodded our understanding and I got into the passenger seat and Mrs Blue handed the bags to me. I held those four bags as though they were made of spun sugar. Mrs Blue drove carefully through the lanes and we arrived safely at the Mill not having spilled a drop of water.
"Look!" I called to Mr Bluefunnel as I climbed carefully out of the car "We have three fish and one invisible one."
He looked at the bags, looked at Mrs Bluefunnel, looked at me and then said
"I don't know who's the daftest, you for carrying a bag of water," he turned to Mrs Bluefunnel, "Or you for letting her!"
We looked at one another and only then did we realise how daft we both were.
As is always the case the goldfish soon died, except the invisible one who lives on even now.
Posted by Ladkyis at 01:18

What a great story and perfectly evocative of the fete/fairs going on around the country.

A laugh out loud story! In fact I think I'm going to have to go back and read it again so that I fully get to enjoy all the little details. I love the bit about Paul mcCartney being cut off before he could get started, and the invisible fish and - all of it actually!

What a fabulous story and wonderful photograph. You painted the scene so well. I could literally see you carrying those bags...

love the invisible fish - they are the longest lasting ones aren't they?

Brings back memories of my youngest BIL winning a fish, me buying the necessary bowl etc. and then him saying, "my Mum won't let me have one' so the fish came to live at my house... :lol:

What a brilliant recollection! Love the invisible fish and glad he is still going strong lol!!

I love Raglan!! And I'm pleased to hear the invisible fish is still doing well :)

I want a whole tank of invisible fish!
Rinda

Now those invisible fish are the ones I could live with! If only I had 'known' you some years ago. Fabulous story telling as always.

The great thing about invisible fish is that you don't need to get anyone to look after them when you go on holiday! Great story, very well told!

What a wonderful story....the perfect pet!!!!

Another fabulous and funny story ~ brilliant!

Great and entertaining story. But here's my question:
If you live in England and say "civil war"---do you automatically think of the American civil war---or did you just qualify that for us Americans? I learn so much from y'all!!

Barbara, sometimes I like to make sure people really understand and as I have a great interest in both "Civil wars" I just wrote that because it fell into my head as I was writing

That is a really lovely story that really made me smile, thanks for sharing.

What a great story. I love all the little details you added as it made me feel like I was right there. Invisible fish are the best !

Great story, I'm glad the invisible fish still lives on, and always will now on this blog as part of the story! x