I was looking for something, a picture of my Uncle and aunt when they came over from Canada. I haven't found it yet but I did unearth these pictures of my children in Primary school. 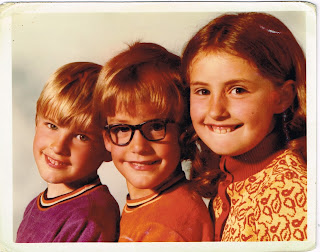 Now they are not sitting in age order because my youngest son inherited all the tall genes and was a good three inches taller than his brother when this one was taken in 1975 so the ages go from left to right 8, 7, 10.
They all look very blond and I am still taken by how beautiful they are - a mother's eye. 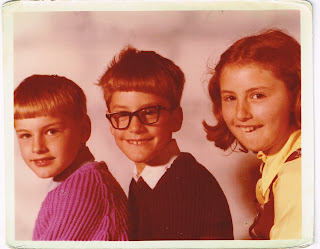 This is a year later. My daughter had decided that because she pulled a funny face the year before she should do it again! Youngest son still wearing the glasses - don't you just love the crazy angle? at least he was wearing them. We had three pairs for him the ones he was wearing the pair that needed repair and would be taken in to the opticians soon and the pair that was at the opticians waiting to be collected. we did this for ten years and he soldiered through it because he wanted to get rid of the squint without surgery as much as I did. 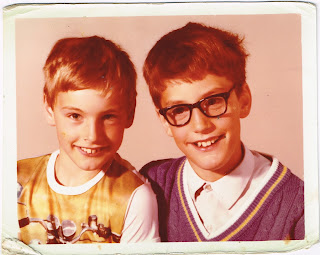 My daughter has moved on to secondary school but the photographer has still put the tallest on the right - better composition eh? This is 1977 so ages 10 and 9.
Eldest son was developing his wry sense of humour and delighted in long and rambling jokes and he could always get his younger brother to do most anything he wanted, but just let anyone try to harm them and they closed ranks and were united against the world.

You can tell I am quite fond of them can't you?

Lovely photos - remind me of the ones of me and my sister in the same era! I must look them out!

Yes :) I had a pair of glasses very similar to those ones: it was either that or pale pink or pale blue in those days. It's lovely yo look back

How lovely to see these and yes they are beautiful

These are so much fun. Glad you posted them. I'll have to get the images from our portrait session up soon.
rinda

Fun collection to wander through with you. Mums are meant to be fond and proud of their kids :)

Ah I remember NHS glasses. Princess is considering the squint surgery - we were told to wait until she'd finished growing and she thinks she probably has.