Let's go on The Matthew

I warn you I am going to be talking about my birthday treat.
We went on the Matthew! you know, don't you? the replica of the ship built by the Bristol Merchants and sailed across the Atlantic in 1497 by John Cabot. Now I'll bore your ears off with the details.

In 1495 John Cabot a merchant in Bristol managed to get finance to build a ship that would sail west across the oceans and discover a new way to the orient and the spices that were so eagerly sought. In 1497 he took 107 other people with him and a ship full of chickens and goats and off they went. After 55 days they bumped into land and they decided to call it Newfoundland.
Fast forward to 1994 when a trust was set up to build a replica and sail it across the Atlantic for the 500th anniversary. 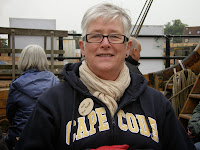 We went for the day with Mrs Bluefunnel. Please note the badges we are wearing because they were made specially by Mrs B. Hers simply says Mrs Bluefunnel which to anyone else is not funny but to us is hilarious - oh and she was thought to be a tour guide because of it and got asked questions while holding the door for Miss Em in the Ladies loo. 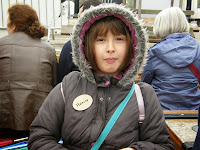 The Divine Miss Em with a mouth full of Werther's Original and a badge that says Heiress. This is because Admiral Cunard Bluefunnel has said, in front of witnesses, that when his ships (please note the use of the plural here) come in, Miss Em is the Heiress. 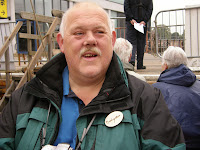 Mr M was and is the Navigator. He has this uncanny ability to look at a map and then put it away and still have it in his head. This is why we never get lost we only ever mislay a turning and get ...distracted. 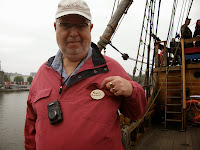 Admiral Bluefunnel had his badge hidden under a pocket flap because he thought he should be in disguise as this wasn't one of "his" ships. He thought he might be asked to drive it, he said, and was relieved when he was told that the River Pilot would be on board so he didn't have to worry. 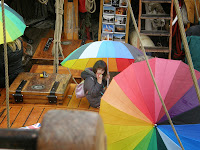 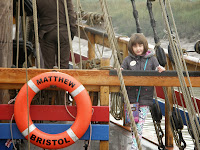 Even the wet weather didn't spoil our day, in fact the colourful umbrellas were very pretty. Miss Em sat happily under one while muching on her apple, her biscuits, her werthers and other snack like comestibles. She was extremely careful about litter and made sure she put everything in the bin without EVER being asked or told. She is a joy to take out and as Mrs Bluefunnel said at one point "I had forgotten how much fun it is to wind up small kids" This was after they had terrified her by saying that her seat was up in the Crow's nest and then when she Miss Em said she thought a drop of rain had fallen on her Mrs B told her that it was bird wee! When she realised they were teasing she didn't get upset or sulky but after that everything they said was thought about and quietly verified with Grandpa before being believed.
She saw and photographed herons, lapwings and a deer that she spotted on the bank. She also looked at lots and lots of joggers and agreed with what Wicked Uncle Cliff had told us last year, that you never see a happy jogger. She would peer at them on the bank, running through the trees and then look at me and say "no Grandma, he didn't look happy." After our fabulous trip we went to Smiley's Fish and Chip Shop in Bedminster and had fantastic fish and chips and talked about the fact that any of the people in the street could be related to Mr M and we wouldn't know, because this is where his ancestors came from.
Posted by Ladkyis at 08:25

There's nothing to beat a good birthday trip, especially if it includes badges and some snack like comestibles (now there's a phrase to conjure with. love it). I'm glad it was a good one!

There are so many things to comment on here! I had to look up the word "comestibles." You can bet I'm going to "whip" that one out on my family and friends! Thanks for that. Also, it must be getting colder there as I noticed the coats. All in all, it looks like a fine outing despite a little rain.

Well I am pleased to hear about such a wonderful trip. Happy birthday!

I loved all the ramblings because I absolutely love the Matthew! I look for it every time we go into Bristol I didnt know you could go on it!!!! Thank you. Love the badges.

I love the photo of the umbrellas, and I really, really love "hearing" you tell your tales.
Happy brithday!!!
Rinda

Oh how fun I know all about John Cabot of course 'cause of Boston but hadn't realised you could go aboard the ship. What a wonderful trip and I love the badges. Tell the Admiral there are lots more witnesses now too ;)

Oh what an absolutely delightful read. It sounds like you had a super day despite the weather. I remember it being a huge thing when the Matthew came over here in 1997. Ok, off to look up comestible.