Rinda asked us if we had ever had a family portrait taken over here at Gallo Organico and it set me thinking
Several people said that family portraits weren't really a thing that happens over here in the UK and I wondered if the ubiquitous School Photographs were what stopped us going to a photographer's studion to have a special picture taken. After all why fork out to a studio when you know that your children will be photographed every year from the time they start school. The more I think about it the more I am certain that the school photograph is the reason I never took my lot to a studio. They were photographed together from the time that the youngest started school.
The closest we have come to a portrait picture is when Miss Em took a picture of us on holiday 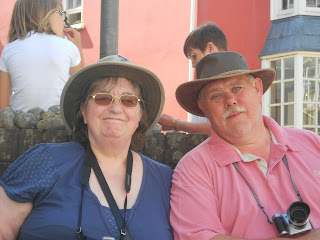 Now when you consider that she is only eight and a half I think, with a little photoshop to remove the people behind us and stop the pole growing out of my hat, we'll have a picture that could grace a Christmas card. Although Mr M hated the top I was wearing so perhaps it'll just go in the album for this year.
I told him I was only intending wearing it until it was worn out and he said "I decree that top worn out and no longer wearable."
"If he hates it that much," I thought "I'll put it in the charity shop bag right after it has been washed." And I did.
Posted by Ladkyis at 12:23

I love your portrait! I think Miss 'Em did a fine job!

I'd been thinking the same about why we didnt have family portraits taken. I think we saw it as something posh people did.

We had one of those 'dressing up' pictures done many years ago but apart from that, no, never been to a professional photographer for one. I love the picture of you both.

It is a great portrait! Thanks for your musings today. Our kids get school photos, too, but never together. I think there's a good business opportunity for portraiture in the UK!!!
Rinda

Lovely picture! I think you could definitely have something there..we didn't even buy the school pictures because my Mum thought they were a rip off. Which means of course that even if the ones of my kids weren't the nicest pictures , I bought the lot so that they didn't have to suffer the ignominy of taking them back to school un-bought!

I only bought one set of Princess when she went to school - after that I took her photo as she figured I did a better job. Wookie bought the CD of Princess getting her awards though so it made up for any savings....