On Sunday Mr M and I were on our own in the house, a rare ocurrence these days but DD and her family took the opportunity to go out visiting so we enjoyed the peace.


It was also a chance for Mr M to sit quitely and doze - his pulled muscle won't let him lie down to sleep so he has been sleeping while sitting at the table.


He had the TV on quietly so I took the opportunity to make a pumpkin pie. I have never made one before so I had scoured tinternet and found several recipes then examined the contents of the larder to see what I had that fitted the recipes. I roasted the pumpkin according to instructions and then pureed the insides - all the seeds and stringy bits went into a mash for my girls, more of that later.


The pie is gorgeous 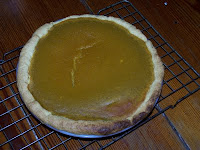 a little overdone on one side - that's cos the oven is old and tired. We had some with Frank's icecream and it was delish!

Because there was so much pumpkin puree left after making the pie I also made pumpkin and nut bread. This is really a cake and is also delish. I used fresh eggs from my girls to make the pie and the bread and the rest of the pumpkin puree - and there is still about two pounds left - is in the freezer for the next batch of pumpkin baking.

I made up the mash for the girls with the pumpkin seeds and the stringy bits together with the skin and some of the singed bits. I put them through the mincer on the Kenwood Chef along with a cabbage that had been forgotten and a couple of ropey carrots and some bread rolls that were supposed to be for little Miss to take to school only she wanted "proper" bread. I added a drop of water and boiled it all up then when it was cooled I took it down to see if they liked it. They practically ripped the dish out of my hands! so pumpkin is a hit. They also like sunflower seeds. We have some sunflower heads and I cut one off and hung it on the wire of the run, they love it.

having a good chuckle here - your writing is so warm and descriptive. helena (shimelle classmate)

Chuckling here too. I loved hearing about your girls, I haven't given my girls pumkin yet but I must let them try it.I'm making pumkin pie tomorrow.

Looks lovely :-) I don't think I've ever cooked with pumpkin, must try it!

As far as the Wordles go, I couldn't get them to work first time because I didn't have the latest version of Java. Might it be that instead of the firewall? I agree that I wouldn't take any risks with the firewall :-)