A thank you gift 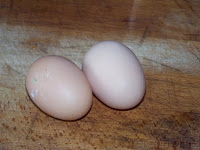 Look what they gave us this morning, as a thank-you for saving us gift.

When I opened the door to their house this morning three of them were in the laying boxes and the one with a bare bottom was on her own guarding the food container. I put them into their run - they will get the hang of the little door eventually - and when I had cleaned the c*** out of the food thing and given them fresh water I realised that three of them were hiding under the house while the one with a bare bottom was guarding the food thing at the other end.

Each time one of them got a bit brave and headed for the food Bare bottom would peck at them, She is now known as Mrs Pecky. 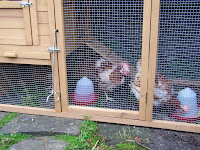 They will establish their pecking order but it looks so aggresive and violent while they are doing it.

My friend sometimes looks after her son's chickens when he is on holiday. One of them bullies one of the others,and she wears a little beak guard so she doesn't hurt her. If she persists that might be the answer.

That's a good idea, I think I might try that.