I have been meaning to share this for a while but the distance between the back yard and the computer is just sufficient for me to forget on the way here.
One of my chickens, Koala, has a really mournful voice. I mean really mournful. When she is talking to the other chickens it sounds like she is the class moaner, you know, the one in every group that always finds fault with everything. When I talk to the girls, as I do every time I go out there, she has this thing of starting her croon very quietly and gradually increasing the volume and finally doing a couple of clucks at the end and it sounds just like................well, let me tell you a story.

In 1979 we, that's me and my three children, went on holiday with my cousin and his wife - they are now known as the Bluefunnels - to Scotland. This became "The Scottish Trip" and it was a godsend because my marriage had ended ten months previously and the kids and I were still reeling from the after effects.
We drove up from South Wales over night and three kids and three adults in a Ford Cortina estate car is a bit.... testing. It wouldn't be allowed now because the boys travelled in the very back of the car with pillows and sleeping bags tucked in around them - just like dogs are carried now. During the journey and the wait for the AA (I'll explain that in another post) we all acquired nicknames because you don't use your real name on holiday you have a holiday name. As part of the discussions about names there was a short interlude of doing impressions and my eldest son came out with his impression of Louis Armstrong doing an impression of Bing Crosby singing Gone Fishing. 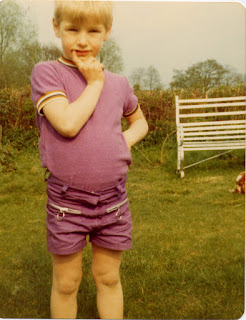 His mournful warbling reduced the rest of us to tears of laughter and for years after all he, or anyone else on that holiday, had to do when in the company of anyone from the Scottish trip was to start with G O O O O R R R N N N Fishing. We would all fall about laughing and then go straight into the Do-you-remember? thing.
Imagine the scene when I go out to let the chickens out or feed or whatever and I speak to them. Immediately Koala starts her croon and she sounds just like my son so I smile and then I chuckle. I told my daughter about it and showed her by speaking loudly enough for Koala to hear me through the window. The look of delight on my daughter's face was just marvellous

Brilliant story! I think we might need to hear more about these holiday names and definitely more about Koala's complaints..

What a great memory---and to think you are reminded of it daily. What a great way to start the day! I've never heard of holiday names, but it sounds like a good idea!