Day 7. Friday 13th July 1979. Wet, cool, dull with one sunny spell.
Everyone except Selwyn got up late. Went for a walk to Badcall Bay - the long way. They neglected to tell me that it meant walking along the tops of cliffs and doing an impression of a sheep. Tattoo spent the whole time muttering and sliding into puddles. Found a pool with water lilies growing in it. Looked for serpentine stone - I found one - Selwyn found a "Haggis Shell" she was very proud of herself. Discovered that Radar's shoes have holes in the soles. The darned things are only two weeks old. He has worn them out from the inside. He spent the day with soggy feet.

Wilmott and Kelly went to see Gaynor and Angus while Hotlips Radar and Selwyn kept the campsite awake with their shouts. 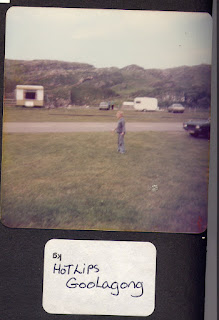 Day 8 Saturday 14th July 1979. Cloudy, drizzly cold.
Up about 9am. Breakfast then off to Lochinver. Went to the stoneware pottery. The things are beautiful. Tattoo bought a bowl with a pouring lip. Wilmott and Kelly bought a dinner service*.
Went to the harbour, ate chips, then back to the site. A quiet read, a little sleep then supper was the plan.
Selwyn wanted a translator to ask some German boys to play football. Wilmott sent Janice (Selwyn's campsite "best friend") to say "Wollen sie Wilmott?" it broke the ice.
A mad game ensued with everyone on a different team running around like mad in all different directions. Sometimes trying to catch the ball and sometimes trying to avoid it. Wilmott was on one team with Hotlips and Radar and what seemed like a hundred German scouts (slight exaggeration) while Kelly and Tattoo with Selwyn had about a hundred German girl scouts (more exaggeration) - it just fell that way ok? At one point Kelly forgot all about tactics and yelled "Just grab Twizzle in the dungarees!" so we tried.
Wilmott finished up falling off the path and breaking the glass on his expensive watch. He got told off by Kelly for wearing it to play. We all retired to the palace and spoke Platt Deutch and pidgin English. Then Manfred brought his guitar. 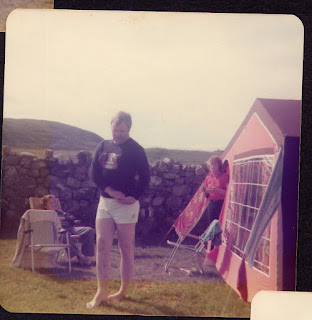 Note from Worried Kelly: "Would you all like coffee?"
Chorus of yes please
"Could you go and get your own mugs please, we've only got ours?"

Thunder of feet as 12 Germans leave the tent.
More thunder as 16 Germans come back.
We sand Cat Stevens and Beatles until Angus asked us to be quiet. "Come on Taffy, your not in your valleys now"
Answer from Musical Wilmott "I was just going to get the pipes out"
Splutters and an expletive or two were heard as Angus retreated.
A really good day
Posted by Ladkyis at 03:23

More camping hi-jinks and very enjoyable they are too. What really strikes me is that we make such a thing today about fancy photography - and yet look at those fabulous photos, would anyone really have them any other way? I love that 70's look