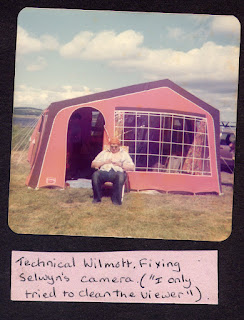 During the course of our stay in Bunchrew we heard many strange things. Or should I say we overheard many strange things. Mrs B and I were washing the dishes in the washup place. A row of sinks with free cold water and hot water for two pence a time in a slot meter. There were several other women in there with us and we heard one ask another "Have you seen that huge trailer tent that is by the river bank, the orange one?"
"Yes", replied her friend "It's like Buckingham palace on wheels!"
We finished washing the dishes in silence, not trusting ourselves to speak and then took our clean and sparkling cups and plates back to Buckingham Palace.  Now on to Day 2. 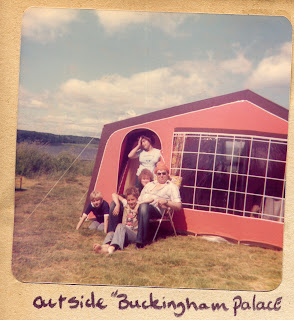 Tattoo woke up at 6am all on her own. Went to the loo (a short trek across the site), stepping on Selwyn in the process. Read her book for a while and then put the kettle on and woke the sleeping beauties. Breakfast, courtesy and Monsewer Wilmott, was great. Kelly and Tattoo went for a walk. Selwyn found silver in the rocks and is convinced that her fortune is made. Rader spotted a seal in the river. Kelly found a stopper for a bottle.
Had a lovely shower for 10p and then had an uneventful evening except when Kelly got stuck in the mud on the river bank in her new yellow wellies.
Early to bed because we have to be up early to take the car to the Ford Hospital.

Day 3 Monday 9th Dull, sunny intervals.
Up at 6.45am, Coffee, breakfast, wash and into Inverness for 7.45 to get the car fixed. Walked around the town and bought supplies. Had a look at the castle. Hotlips is now the proud owner of a "Private" station and Sheriffs Court (I will explain this at the end). Wilmott convinced Radar (who was only ten) that P-O-L-I-C-E spelled Private in Scottish. So the police station in Inverness Castle is really a Private station.
Caught the 10.15 bus back to the campsite to wait. On the way into the site we "took the humps fast". This meant that we got into the same formation as we would have been in the car and with Wilmott making the engine noises we ran, in formation, over the speed restriction humps. This meant that we were still giggling hysterically when we reached the tent.
Hotlips and Radar played tennis. Wilmott found a phone box and rang up about the car.
Note from mechanical Wilmott: Loss of compression due to a malfunction of maladjusted tappets.
We read book and played scrabble. Wilmott collected the car and went to get chips for supper. Tattoo went to the loo and heard two french boys practising their english for the benefit of some girls. (please read with a french accent)
Boy one:     Have you any engleesh cigarettes?
Boy two:     Yes I 'ave
Boy one:     Give me one of your cigarettes
Boy two:     You are seeting on my cigarettes!
Packed up a lot of things for tomorrow.
Sad note from unhappy Wilmott: the chip shop was out of Haggis!

Hotlips "owning" the private station is something that my Dad started when I was small. When ever we went to a castle or ahouse or even a beach my Dad would offer to sell it to me for thruppence (three old pence) I own half the castles in Wales because of this, and Mr Bluefunnel who was usually with us on our travels owns the other half. We jointly own Cardiff Castle as that is a big one. After the breakup of my marriage I was able to bring this delight to my children. Being on holiday with Mr B meant that he was quicker than me to remember - and he was a sales rep then so I didn't stand a chance and he sold Inverness Castle with its private station and Sheriffs court for three new pence to Hotlips. Radar did not sulk.
Posted by Ladkyis at 01:49

Sounds like a lot of fun family adventures. You were so smart to keep a trip journal!