Too Cool for School

This story is part of the Storytelling Sunday brought to you by Sian at Fromhighinthesky After you've read my contribution why not follow the link and go read all the other wonderful stories? As soon as I have written mine that's what I am going to do. 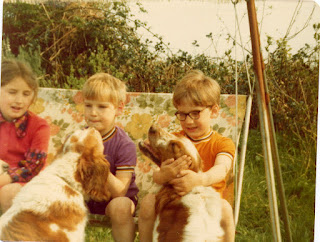 When my children were small we lived three miles outside the village of Raglan. This meant that every school day we had to be up by seven o' clock so that the children had time to eat breakfast, get dressed and then walk the quarter of a mile to the junction in the lane where the minibus would pick them up. This would transport them to another junction where several busses met to exchange children from various routes and then transport them to school. My two oldest children were well used to the routine when their little brother joined them at age 5, when he started school. He soon fell into the pattern and pretty soon I could trust them to come straight home in the afternoon when the bus dropped them off at the junction. My boys were very good friends with the Peterson boys - for some reason always known as Big Paddy and Little Paddy ( This meant that their parents soon became known as Mr and Mrs Paddy - I have no idea so don't ask) and as they all went home on the same bus they got to spend even more time causing trouble being typical boys together.

Things were going swimmingly until the lovely summers day when it was time for the children to arrive home and I was doing the "not-worrying-they'll-be-fine-walking-home" thing while getting their meal ready and finishing off the daily chores. I heard the sound of running feet and hurried out of the door to greet them. My daughter skidded to a halt, put the back of her hand to her forehead and declaimed dramatically "He Didn't Get On The Bus!" Eldest son (just 13 months older than his baby brother so far more worldy-wise) was dancing, actually dancing from foot to foot with glee and singing "He Didn't Get On The Bu u ssssss! He didn't get on the bus!"
Now I don't know about you but for me if there is a stupid question to ask then I always ask it so I said "Where's Mark?"
A pause of a nano-second and the performance was repeated and then my mother, G*d bless her asked the other stupid question
"What do you mean, he didn't get on the bus?"
My daughter swapped hands so that she could to the dramatic gesture with her right hand while keeping the left firmly fixed to the forehead "Granny!" she wailed "He didn't get on the bus!"
I ran to the phone - no mobiles in those days - and called the school. The headmaster said he would get the staff to search around the school while he called every parent of the children in Mark's class. I asked what I should do because I couldn't just do nothing and my mother would sit by the phone. Mr Clark said I should drive into the village and look in fields to see if he was walking home. So I did.
I stopped at every gateway and looked in expecting to see a little broken body, while my mum calmed the other two and waited for the phone to ring. That was the longest three mile journey of my life but there was no broken body and no little boy walking home.
By now it has been over an hour since they came out of school. Mr Clark was cool and calm when I got to the school. The staff were just about to begin the first sweep of the gardens and the churchyard next to the school while Mr Clark had contacted all but three of the parents of Mark's classmates. As he was about to lift the phone again it rang. We all stopped moving - I think we stopped breathing too - as Mr Clark answered the phone. "Hello Mrs G" (Oh G*d! it's my mother!) "Really, oh that is good news, yes, Ann is here, I'll tell her straighaway. Thank you for ringing so quickly, goodbye". He turned to me and explained that Mark was safe. He had gone home with a boy from his class and they had stopped somewhere on the way and had just rung my home to ask if it was alright for Mark to be with them. I burst into tears and was hugged by several members of staff and offered a large kleenex by Mr Clark.
"When I go to fetch him, how should I react?" I asked Mr Clark "I don't want to be angry and frighten him but I do want him and his friends parents to know just how scared we have been."
"Quiet and deadly, with wringing motions" He replied, twisting his hands as though wringing out a towel "That should do it." So That's what I did. I stopped the car ouside the friends house and when everyone came out of the house I was so angry I couldn't trust myself to say a word to the child's parents so I pointed to the back of the car and said "IN". Mark got in. His friends mother then gave me some pathetic drivel about having to stop on the way home and not being able to ring us to see if it was ok until they got home and they were really sorry... ". Through gritted teeth I said "I'm sure you are." Then I put the car in gear and drove sedately away. NO wheel spins no surge of speed I was so good.
The following week Little Paddy didn't get on the bus and the staff and parents swung into action again. Once again there was a safe and happy ending because his grandmother was driving into the village and saw a little shape trudging along the side of the road. She thought "That looks like our little Paddy" so she stopped and asked what he was doing. "I'm walking home," he said. "Why aren't you on the bus?" asked Granny. "Because Mum said I must always do what Big Paddy says and he said get lost so I am trying to."
"Get in the car, I'll help" said Granny.
The following day a register for the bus was created and children were not allowed to go home with anyone unless a note was sent to school and the register was marked accordingly. Mr Clark added a new paragraph to his welcome to school message for new children and Raglan village settled down to normal life again - for a while.

you must have been so worried!

Remembering the terror when I lost one of mine I can empathise - glad that the register was invented and the paragraphs added.

So glad all was well in the end on both occasions. You must have been frantic. And then the casualness of the children, not knowing or understanding how concerned you must all have been. Thank goodness they started a register after that.

Such a classic tale - glad it all worked out.
rinda

I didn't dare breathe through most of that! So I'm on a big sigh of relief at the end - and I especially like the bit at the close about adding the new paragraph. That rings so true!

Brilliantly told, I hope you remind them of this now and then ;-)

I literally sighed with relief at the happy ending, too - what a frightening experience for you! Thank goodness he was safe.

What a relief! Good idea them creating that register.