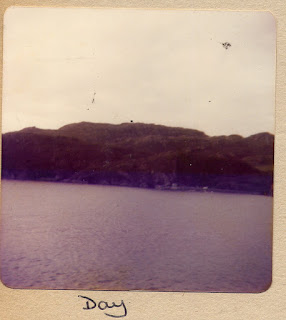 Before I give you the journal entry for day five I just had to share these two pictures, taken from outside the door to the toilet block - good view eh?

Selwyn sat on the low wall there waiting for the sun to set. She waited for hours, watching the sun travel along the horizon and finally gave up at 11.30pm when it slid past the cliffs and it still didn't get dark!

We tried to explain about being so far north that it doesn't get totally dark in Summer but she didn't believe us. I suppose she'd been caught once too often by Wilmott and his convincing stories so the one time he is telling the truth she simply would not believe.
She took the "night" picture just before she gave up and came back to the tent and went to bed. 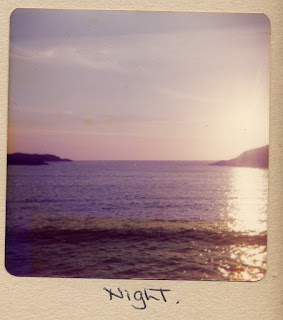 Continental brekkies then off to Durness to the craft village. Lots of lovely things. Beautiful marquetry, jewellery, leather-work, woodwork, metalwork and Siamese cats. Went onto Balnakiel beach at Durness, it was beautiful with white sand, blue water, sand dunes and not much wind but FLIES!

Wilmott built a racing car for Hotlips and a speedboat for Radar, then wrote DON'T LOOK MARTHA! down the beach (the song The Streaker was in the charts around this time). 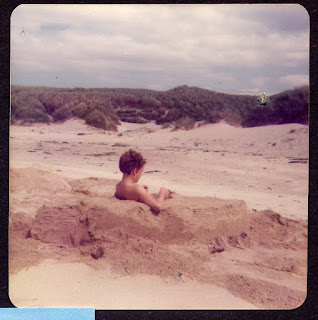 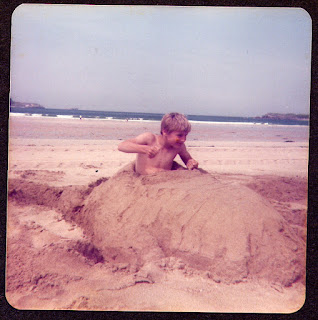 Radar swam under water, all of him not just his face. Found the loo then went to Kinlochbervie to book for tomorrow. Back to Scourie for tea and then down to the beach for a walk. The tribe all decided to go in the water. After a great deal of throwing one another in they all picked on Tattoo. Goodness me that water was freezing cold. She couldn't feel the benefit of the gulf stream at all.
All these antics just served to convince the two French boys next to us on the beach that the British are insane. When I squelched back up to the palace they were outside their tent, laughing at me in French. They thought I couldn't understand.
9pm. sat outside the tent watching technical Wilmott set up the fishing rods for tomorrow. Tattoo is NOT going. A silly game of scrabble then we all fell into bed exhausted.

Day 6 Thursday 12th July 1979 Hot, sunny, slight breeze + cloud.
The fishermen went off early to get their boat. Selwyn and Tattoo left behind. A lazy day much of the time spent asleep. The fishermen caught two jellyfish and each other's lines. Radar caught a fish but it escaped. The reason they came back early was explained by Kelly. Here is the fishermen's tale.

"We were way out in the loch - a sea loch - and we were all fishing when suddenly Wilmott said 'Time to go!' He started the engine and whisked us back to the quayside before we even had a chance to reel in our lines. We were a bit confused but we bought some fish for tea and while the boys were climbing into the back of the car Wilmott said 'I saw a shark, so I had to make sure the boys were safe'.
What he had seen was the fin of a dolphin but he won't ever admit it."

We had fresh fish for supper. then Nastase Wilmott played tennis with three boys on bikes as the net.
PLayed scrabble and Tattoo came over all unnecessary because she got rid of all her letters at once and scored an extra 50 points.
Preparing for bed when there was a knock at the tent. Selwyn has started having callers.
Kelly did a superb balancing act when she threw her chair out of the trailer and then tried to do a back flip over the top. Request from sarcastic Wilmott: Will she do it next time with the chair on fire so she can join the circus and make him lots of money?

I'm telling you it was a shark! I had to protect everyone so came back to shore quickly. That's my story and I'm sticking to it, OK.

I'm telling you it was a shark! I had to protect everyone so came back to shore quickly. That's my story and I'm sticking to it, OK.