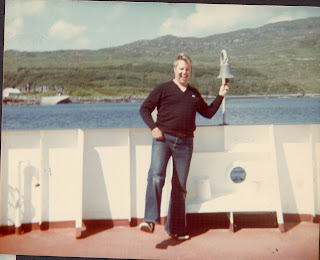 Up early, Manfred, Tomas and the rest came to say goodbye. We were sorry to see them go because they are such nice kids. Slept or read most of the day. Tattoo made Curry, rice and chips which everyone said was great. Note from surprised Tattoo: "I only made it with what was there!"
Started to rain then everyone went fishing. Wilmott caught a sea trout and everyone got soaked. The groundsheet was floating in places when we got back so everything up off the floor and into bed. 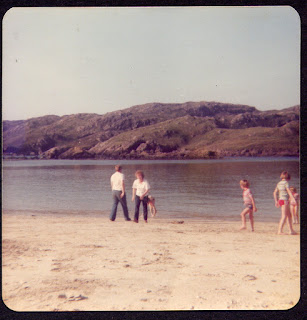 It poured down all night. Note from Fisherman Wilmott: "I put six night-lines under the ground sheet, no luck!"

Day ten. Monday 16th July 1979. Pouring with rain.
It was chucking it down when we got up and even though everyone was miserable it doesn't really matter. Breakfast. Note from fishmonger Kelly:" I cut off the fish's head and EVERYTHING!"
The cry of "Unca Bernard!"* went up - Wilmott broke his chair.
Went to the chippy - three chipped steak, one haggis, one sausage. "The haggis was great". This comment from Gourmet Wilmott.
Note from Poetical Wilmott "Hotlips, you're not a batter eater, you're a batter eater's son and you're only eating batter 'til the batter eater comes."
A few chapters of Robin Hood read by Jackanory Wilmott rounded off the day.

Uncle Bernard is my Dad. He was a role model for all my cousins as they grew up because, I suppose, he had lost his right leg at the end of WW2 and spent his whole life proving that he was just as good as any man with two legs. He could make things from whatever was lying around and could fix things too. He repaired clocks and could do really fine work but he was also what he called a "Hedge carpenter" and would use great lumps of wood and a huge hammer where perhaps smaller would have been better. Whenever anything broke in the whole family they would all look to "Uncle Bernard"
Posted by Ladkyis at 04:39